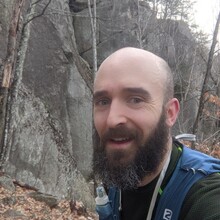 I noticed there wasn't an FKT yet for Pawtuckaway, and started doing some digging. While there have been multiple runs with all three peaks completed, they all started at random start points (parking lots inside of the park). I felt a way to equalize it, would be starting at the same location (main entrance) and then giving the option of going different routes to the three peaks, then back. When I plugged this route into Strava, there were no attempts at it. If someone else has completed this route at a faster time, I'll be happy to relinquish the FKT to them.

Was intending to go for a scouting run, but the day felt pretty good so I pushed the pace. There were segments with ice, which made it a bit more challenging, but overall the trails were dry.  I started at the ranger pay station, and ran to Mountain Trail/South Ridge Trail to the top of South Mountain. From there, I took the tower trail down to the Middle Mtn Trail, which is an out and back from Middle Mtn.

I ran back to the south ridge trail, and followed Round Pond to the Boulder Field and up North Mountain.  There appears to be an unofficial trail up North Mountain on some apps, but it isn't on the official trail map, so I decided to stick with the official North Mountain Trail, which is a fun ridge. Plus I didn't want to skip the boulder fields, which are one of the best parts of the park. From there, I decided to stick with the dirt road to round pond trail, because there was more ice/snow on that section of the trail. That brought me back to the main road, and up to the start/end point.