Pawtuckaway is a state park in southeastern New Hampshire that features three small peaks, remnants of a volcano from over 100 million years ago. Looking down at a satellite map, North and South Mountains almost form a circle, with Middle Mtn acting as a bullseye in the middle.

There are a host of trails in the park that run to the summits, by beaver ponds, by rivers, and through boulders fields left over from the last ice age (some of the best bouldering in southern New England).  The trails range from incredibly runnable rolling gravel roads, soft single track, and technical rocky/rooty sections.

I know people run all three peaks very regularly, but there has been no set FKT route for this park. I wanted to make sure that southeast New Hampshire has some of its exceptional routes up on the map, and feel Pawtuckaway is worthy of a FKT.

Because there are a number of ways to hit all three peaks based on where you park, I feel there should be a common start/end point to the route. Starting and ending points at the Ranger check in booth (main entrance of the park), preceding down the paved road for about a half of a mile. From there, you take a left into the trails, and the only requirement is to hit all three peaks and make it back to the start. 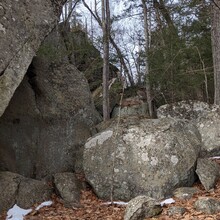 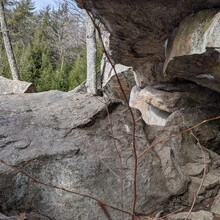 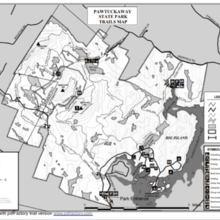