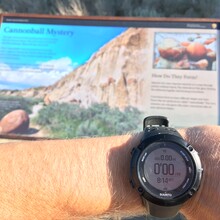 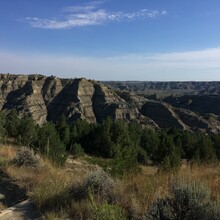 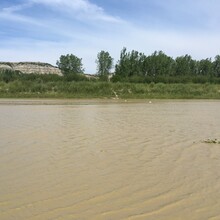 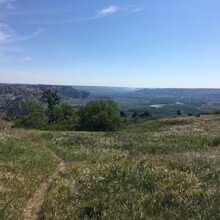 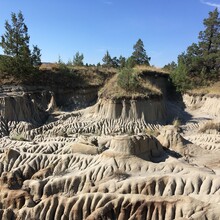 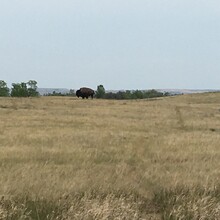 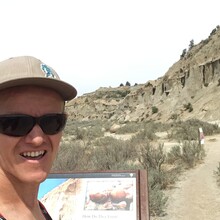 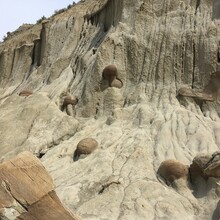 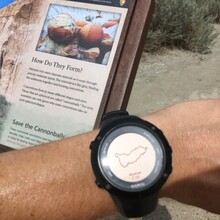 On August 10, 2021 I ran the Achenbach Loop. I had tried twice earlier in the year but didn't want to cross the river when it was 20 degrees out in February and the trail was closed in April for fires. I started at 9:14am Central Time. This route crosses the boundary (the Little Missouri River) between Central and Mountain Time twice so that can make things somewhat confusing. The North Dakota Badlands should be a world class trail running destination, they already are for mountain bikers. The Achenbach Loop is one of the less popular loops in the area, likely because it requires a double river crossing, but it is still very scenic.

I started at the Cannonball Concretions trailhead and went counter clockwise, hoping to keep my feet dry as long possible, and watching out for snakes. I got to the Oxbow Overlook running low on water. My original plan had been to filter from the Little Missouri River. This was a bad plan as glimpses of the river from the bluffs revealed how muddy it was. I crossed the river and 2.2 miles later took a small side trail for the Achenbach Spring which I had read about ahead of time. I continued on the loop, giving a buffalo a very large margin of safety. He was either being curious or territorial and I didn't want to find out which one he was. I crossed the river again, ran through the campground, and finished at 1:54pm.

This time could go much lower (I was still tired from Laramie Peak the previous day and I was very cautious for snakes in the grassy parts) but I couldn't find any faster times on Strava. Most people who do the Achenbach Loop do it as an overnight trip. I consumed 2 liters of water and 600 calories. I saw a family of 4 near one of the trailheads but no other hikers or runners. I ran by myself, unsupported.