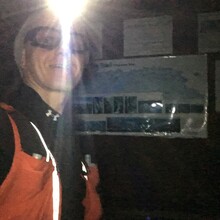 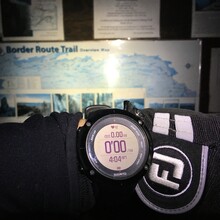 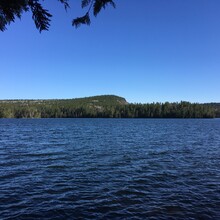 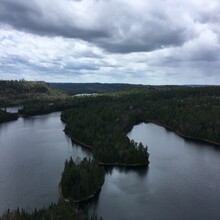 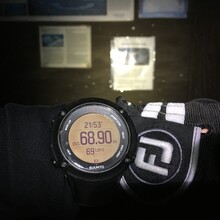 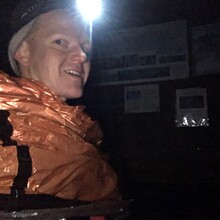 On May 6, 2021 I attempted an unsupported FKT of the Border Route Trail in the Boundary Waters. This was the first FKT route I ever attempted, a couple years ago, but I had trouble following the trail. Last fall I did a couple runs on the trickier sections of trail and thought I would be able to find it without getting turned around.

On Wednesday afternoon I drove to the western trailhead to drop off my bike and set up a tent. Then I drove to the eastern trailhead to sleep in my car for a few hours before starting out at 4:06 am. Ontario to the north is on a different time zone so the time stamps on the photos on my phone all seem to be off by 1 hour. I started out very slowly knowing that this would be a big day. The sun started coming up around 4:30. It was a beautiful morning, right around freezing. I was hoping to run this trail early in the year, before the mosquitos and ticks got really bad. It was still a little wet from the snow that had recently melted, and there weren’t a lot of bugs so I think I hit it about right.

Things were going great after 30 or 40 miles, I was right on schedule for a sub-20 hour time. It was cool and cloudy, just about perfect, until it started snowing. I wasn’t really expecting snow since it was forecast to be in the low 50s and partly cloudy. It was gradual at first, just a few flakes. After a few hours though the snow became heavier and the wind picked up. I pretty much stopped taking pictures at this point and focused on staying dry and warm. I hadn’t really packed for a snowstorm. I turned my emergency bivy into a raincoat and pushed on. I could have stopped and made a fire but that would have been the end of the FKT attempt. I wasted a lot of time moving gear around, trying to run while wearing my bivy, and looking out for moose. I was apparently chasing two of them down the trail in the fresh snow, in the dark.

I lost the trail on the west end and ended up going down a side trail for a while, adding 1.5 miles and probably 30 minutes by the time I backtracked to where I left off. There are a lot of recreational trails on this end of the route and things aren’t signed very well. Still I should have been able to follow the trail with the gps track I had. I was trying to beat the supported time and I knew it would be close. I made it to the west trailhead at 2:00 am, with a couple minutes to spare. I quickly stripped of my wet clothes and got in my tent, which was covered in ice. Then I biked back to my car in the morning. I saw one person the whole day, about 20 miles in. I ran by myself, unsupported. I consumed 3100 calories and stopped to filter water several times.

This is a great place if you’re looking to get away from people. There is no cell signal. The BRT is a very rugged and remote trail. It is rocky, muddy, and has 100s of trees across the trail, though it is in much better shape than it was a few years ago. Thanks to all the volunteers who help maintain this trail and congrats to all who have set FKTs on it in previous years.