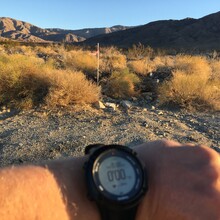 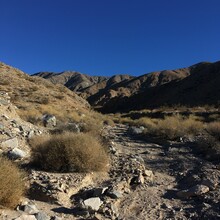 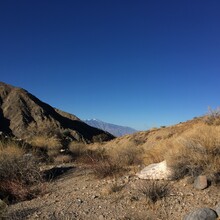 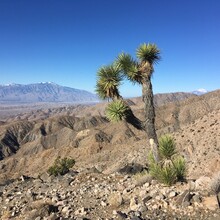 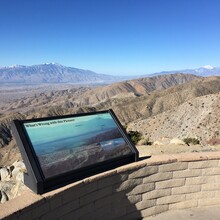 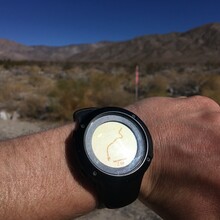 On February 6, 2021 I ran the Keys View Loop in Joshua National Park. I started at 7:09am, which was much later than I should have started but still allowed me to be in the shade for most of the uphill.

I took it slow on the way out, being careful to watch for snakes, especially in the brushy areas and spots without trails. At around mile 6.5 the scrambling started. The rock and gravel was very loose. Sometimes when I took a step I would slide right back to where I started. As difficult as the ascent was it was worth it for the incredible views of San Jacinto!

When I got to the Keys View Overlook there were 5 or 6 people on top. A few of them definitely wondered where I came from. I decided to go back down on a similar route but slightly to the right. I believe this is in line with the “open course” ethic that Rob Manley has proposed. We don’t really want to be creating new trails anyway by following the same lines over and over again in the backcountry.

I got back down to the runable section and knew I’d need to maintain around a 10:00/mile pace to get in under Rob’s time. I did, getting back to Hotwell Rd at 10:47. I consumed about 600 calories and 1.5 liters of water. I ran by myself, unsupported. The only other people I saw were on top of the Keys View Overlook. There is a lot of room to lower this time, especially if you practice finding an efficient route on the scrambling section. Thanks to Rob Manley for highlighting this scenic route!