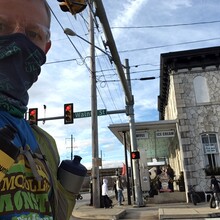 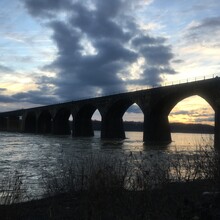 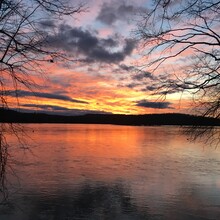 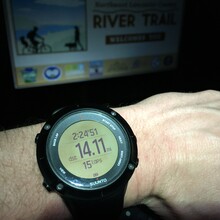 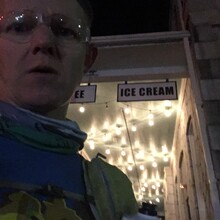 Hardly anything went right on this run. I went so slow I almost didn’t submit this FKT, but I couldn’t find a faster time on Strava, so here’s an unsupported time to shoot for.

On January 2, 2021 I attempted an unsupported out and back of the NW Lancaster County River Trail. I started at 3:23 pm from the ice cream shop in Columbia. I started out with all my gear and food, including 2 liters of water. The first couple of miles went well enough, with many people out enjoying the beautiful weather, even some rock climbers a couple miles in. But the extra weight and pounding on the pavement quickly started to take its toll. I was clearly not fully recovered from the previous weekend. After about 8 miles my initial goal of beating the supported FKT went out the window.

The sunset was beautiful over the river, but I quickly realized that my headlamp batteries were not as new as I thought they were. I reached the trailhead in Falmouth at 5:47, then quickly started back for Columbia in the dark. My headlamp eventually got so dim that I started using my phone to light the way. Clearly a big logistical mistake.

I got back to Columbia at 8:41. I had consumed about 1000 calories and just over 1 1/2 liters of water. I ran by myself completely unsupported. There were a few streams coming into the main river but I wouldn’t trust filtering from them with all the industry in the area. I will probably be back to take a more respectable stab at it.