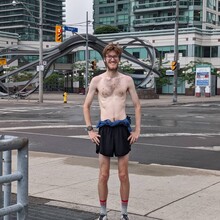 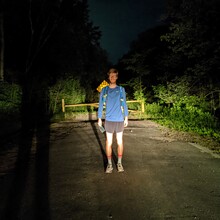 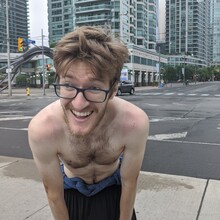 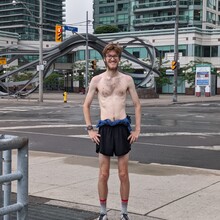 Excerpt from Instagram post:
This morning at 1:30am, my beautiful girlfriend Amy drove me to the northern most point of Yonge Street. Here I would set off on a run from the dead end outside of Silver Lakes Golf & Country Club in East Gwillimbury, ON to the shore of Lake Ontario. In total, about 58 kilometers.

It's been my dream to complete this run for probably close to 2 years now.  I attempted the run last summer, and I made it 43km before my mind and body had enough.

Today was a different story. And if you know me as "the runner", and think this is somehow easy for me, you're wrong. From ~43-50km I had a one-way ticket aboard the pain train, destination unknown. But quitting was never an option - not this time. I walked. I sat down. I jogged if I could. The sun was coming up and the city skyline was on the horizon. At 50km I got a second wind and knew it was all downhill to the finish - I had a smile on my face.

This FKT run was done unsupported. No one accompanied me during the run. My girlfriend dropped me off at the start and picked me up at the finish.  I carried ~1.5 liters of water and 6 Gu Energy Gels in my Nathan hydration pack. At no point did I resupply or receive aid in anyway during the run.

I attempted this FKT unsuccessfully last year and employed the same strategy in that I started my run very early in the morning to avoid traffic. Yonge Street has tons of intersections and the ability for me to run through them without waiting for traffic to pass was critical in my mind for running a fast time.