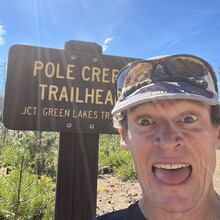 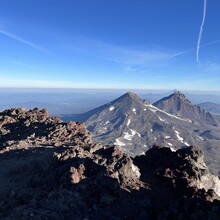 With the super nice weather in October I decided it was time for another Three Sisters Traverse attempt. It's been a few years since this record was put up and many years since I last summited North Sister because of the sketchy scrambling.

I started early about 7am on this because I had to be back in town for a 2pm meeting. It was a quick trip up South Sister in 1:20ish, then down the backside which was a little slow due to some freezing layers and ice buildup on the traverse. Then up the boulder field of Middle Sister and hit the top in 3:10. Due to the technical nature of North, that one took the longest to get up the last 100ft or so of the summit block which has some sketchy 4/5th class scrambling. Made the summit in 4:15 then it was a quick descent down to the Pole Creek Trailhead to stop the time at 5:50:22.

Brought all my food along and refilled water in glacier melt streams between peaks.

All in all, not a bad day out in the mountains and I know I don't want to do North Sister again anytime soon.

Awesome job out there Max!!  :)) This will stand for awhile!!

Bravo Max!!! 👏 makes me happy to see a legendary mountain runner of the Bend area take the mark on an iconic Bend area FKT.