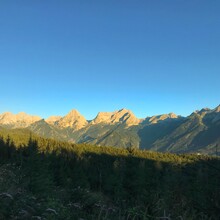 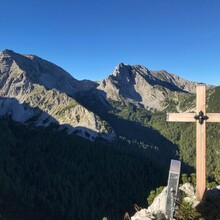 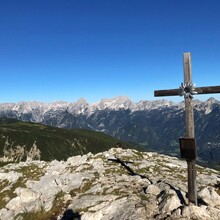 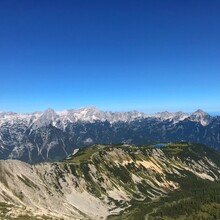 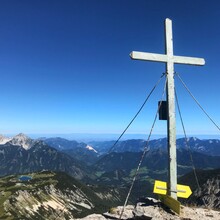 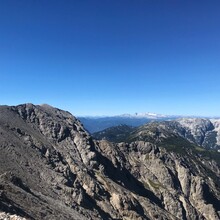 I followed the street direction "Edtbauernalm". From there I followed the sign and gravel path to "Steyrsbergerreith". After reaching "Steyrsbergerreith" I headed direction "Schafferteich". From there on the trail is a mix of gravel and forrest paths. From "Schafferteich" I followed the hiking trail to "Zellerhütte - Warscheneck". (took a break at Zellerhütte and refilled my bottles). I carried on following the path to "Warscheneck", at one point I took a right to reach the top of "Schallerkogel" (1st summit). Back to the original track to "Warscheneck" summit I passed the top of "Lagelsberg" (2nd summit). Next point of interest was the top of "Warscheneck" (3rd summit). From there on I followed the trail direction "Schrocken". On my way there I reached the top of "Liezener" (4th summit). After a long rocky downhill part I reached "Zwischenwänden". From there on it's almost a flat but rocky terrain. After a while running on rocks I reached a crossroad from where I followed the signs to "Elm/Elmscharte". From "Elmscharte" I just followed the ridge to "Schrocken" (5th summit). I stayed on the ridge to reach "Kaminspitz" (6th summit), "Hochmöbling" (7th summit), "Mittermöbling" (8th summit) and "Kleinmöbling" (9th summit). From "Kleinmöbling" I started to descent to get on the track to "Hochmölbinghaus". The track changes from rocky terrain to grass single trails. I always went straight and followed the signs (marked flags) to "Hochmöblinghaus". Again at "Hochmöblinghaus" I took a break, had something to drink and refilled my bottles. Afterwards I followed the way direction "Türkenkarscharte". On my way there I passed "Sumperalm". There is a water spring as well as some chilled drinks (beer and juices - for money). As soon as I reached "Türkenkarscharte" I took a left to start my ascent to reach the top of "Hirscheck", the last summit (10th summit) of the track. I took the same way back to "Türkenkarscharte" and then followed the single trail (passed "Bärenalm") all the way till I reached the main road to Hinterstoder. I stayed on street for appr. 5k till I reached the center of Hinterstoder. (went to the grocerie store prior my last ascent back to "Hutterer Böden"). I followed the hiking trail Nr.217 back to Hutterer Böden.

Hope you are enjoying the track and you will have as much fun as I had!