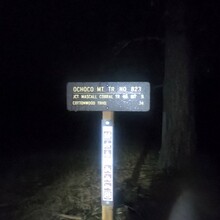 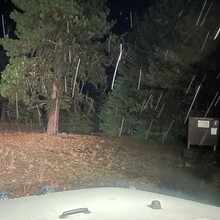 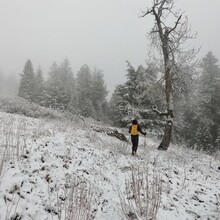 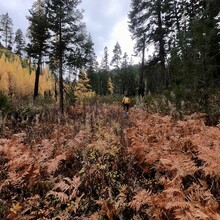 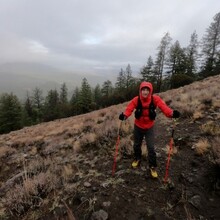 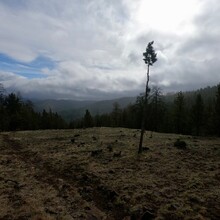 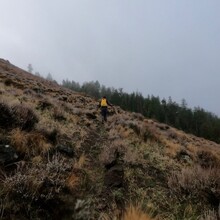 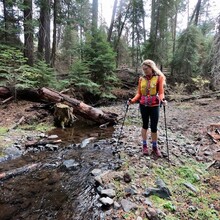 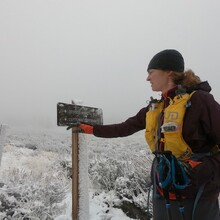 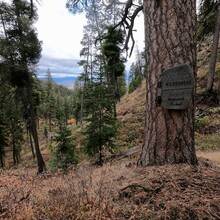 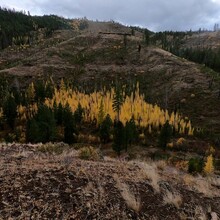 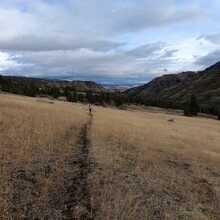 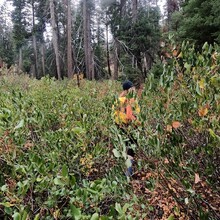 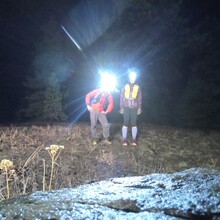 It was snowing when we got to the start at Rock Creek trailhead shortly past 6am. On the way there we almost hit a bear that was running in the middle of the road. The forecast for the day was terrible at best. No one remembers why the mention of "atmospheric river" did not deter us from the beginning.

We packed approximately 17 gloves, 13 extra socks, and enough layers to change every 30min. Not exactly, but pretty close. It is fair to say that our packs were heavy. Yet, we were ready for the worst. We did get some of it, but also, surprisingly, a lot of sunshine.

We decided to go clockwise, so our journey led us down the Rock Creek Trail first. It was dark, cold, wet, and windy. Our spirits lifted a bit as we were finally able to see some great fall colors. It didn't take long for Christof to overhead in his long pants and long pants. He would regret all day that he did not wear shorts.

Megan led the pack and Christof struggled from the beginning to keep up. He never got into the groove and felt bad, if not terrible, all day. Clearly, he was not recovered from Tor de Glaciers and the Cohos Trail FKT.

As we climbed toward Spanish Peak, the snow could not be ignored anymore. Several inches covered the ground, the wind was hauling, and we hoped these conditions would not last all day. Our wish was granted after a few more hours of slow-moving: the sun suddenly appeared out of nowhere and lifted our spirits for a good portion of the day.

We finally reached the bottom of Black Canyon and lost the trail immediately. After some initial bushwhacking, we regained the remains of a trail and some hope at the same time. That did not last long. The next few hours of climbing up through the canyon were terribly slow and consisted of bushwhacking, route finding, river crossings, and cursing (mostly by Christof).

It was dark when we reach the Boing Field trailhead. From there it was a 4.6mi or so road slog back to the Rock Creek trailhead.

We finished the 39mi course in 13:22:21, a time that will be very easy to beat for anybody who goes lighter than we did and in better conditions than we had.