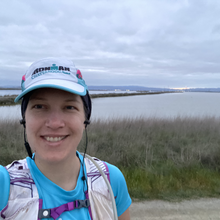 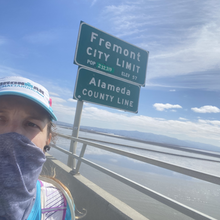 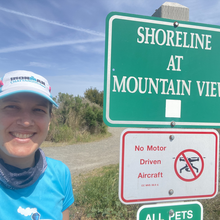 After scouting the water fountain and bathroom situation in the few weeks before this, I realized that the only guaranteed, publicly available water was at the Don Edwards preserve on the east side of the Dumbarton (thanks to Covid, a couple of fountains in Sunnyvale in particular had been shut down). Wanting to do this unsupported, I started at Shoreline Park in Mountain View (specifically, the entrance at the end of San Antonio Rd) and run CCW, which put me at the fountain at 26 miles.

I had a 1.6L bladder in my hydration vest, plus 2 clif bars, 2 gels, some chews, and goldfish crackers. I certainly felt a bit of a pinch on water supplies both from mile 20-26 and the last couple miles, especially with the sun coming out around 11am when I was on the bridge, but I didn't succumb to buying anything at a gas station or similar. My mom called me and kept me distracted for a couple miles on the bridge, but I had no in-person support.

Thanks to Nicole Mackey, whose run in January revealed that the route needs to change slightly (adding ~100 yards) now that the Bay Trail has been routed around the Sunnyvale Water Pollution Control Plant. I followed her route exactly.