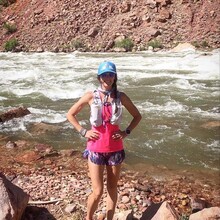 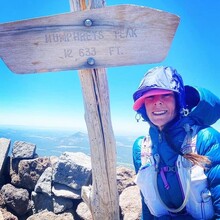 When my plans to run San Diego 100 were thrown out due to the race being cancelled, my coach James Bonnett (current FKT holder for this route) approached me about attempting an FKT. When we realized that a woman had not yet completed this route, I was excited and eager to take on this adventure!! After this attempt, I can understand why this route is so difficult to finish.

This route is difficult not just from the terrain and elevation profile, but the planning on when it can be done. You may have favorable temps in the Grand Canyon but could run into storms, or even snow on Humphreys. Or you have excessive heat in the canyon but favorable temps in Flagstaff. Fortunately, we found a weekend in June with cooler temps forecasted in the canyon so we went for it.

After hiking down with my friend Bill Dittman and filtering water and taking a little nutrition in, I began my attempt at the bottom of the New Hance trail at the Colorado River at 3:32pm on June 6. The climb up was beautiful and rugged but I felt good when I hit the rim. During the climb out, we saw Nick Coury who was heading down to the river on his way to setting the men’s FKT on the same route. From the rim, it was an uphill climb on the Rim Rd until I turned onto the dirt roads that would take me all the way to Flagstaff. I was crewed and paced here by my husband Brian and friend Tim Paziora. After a number of downhill miles, the roads began to trend uphill into Flagstaff. I had some rough patches in the middle of the night but powered through until I began the final climb up Mt Humphreys. We had reports of wind and cold temps but nothing at that point prepared us for what awaited us at the top. To get to the top quicker, I decided to head straight up the ski slopes to cut some mileage compared to taking the Humphreys Trail. Once above tree line, this is where the winds really picked up.

Just after passing the saddle, we ran into Deron Ruse who was coming down from the summit on his way to his Flagstaff Fearsome Four FKT. He gave us a heads up on the 80+ mph winds waiting for us. We had also heard of 100mph gusts from others coming down and after what we experienced, I don’t doubt those numbers. The conditions made it so there were a couple moments I thought I would have to turn around after coming so close but I decided to power through and reached the summit. Brian, my friend Matt Miller and I bunkered down behind the rock wall on the summit to get a break from the wind before starting the trek back down the mountain. Hardest thing I’ve ever done and I know I could have done better but proud to be the first female to complete this route!