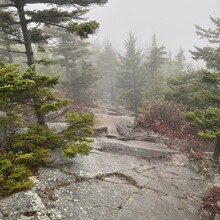 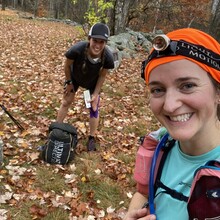 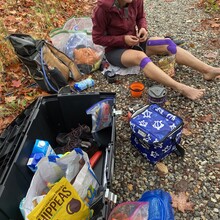 Jenny Johnson & I met on Thursday afternoon to drop our loaded gear bins, then drove to Newbury Harbor where we attempted to get some rest in our cars behind the Newbury Library before setting out for a planned 10pm start. Like kids on Christmas Eve, we couldn't sleep so we rolled out of our cars and laced up our shoes. Starting at 9:30pm we headed clockwise over Mt. Sunapee and towards our first gear drop stashed in the woods (behind the stone wall) at the Route 114 road crossing.

It wasn't until about 9 hours later, as we approached the Great Brook area in New London that we had a glimpse of light and could just make out the water next to us. The course is clearly marked throughout it's entirety and the reflective markers were easy to follow, even though foggy conditions in the dark. As the day progressed, it was obvious that the cloudy forecast predicted would continue as low cloud cover that spat at us for almost the entire trip. Although warm, it was misty. The thick, newly fallen leaves which blanketed the roots and rocks made for wet feet early on. Conditions also required added concentration and calculated movement to avoid ankle twists and slips on the slick terrain.

At approximately 1:30pm we arrived at our second drop spot at Proctor Academy. We fired up the Jetboil and had some hot food, restocked our packs with snacks and water, recharged my watch battery, and did some necessary foot care and knee taping before setting off for Mt. Kearsarge. It was heading up Kearsarge that we saw our first hikers. Other than the Barred Owls, a hare, a large porcupine, some white-tailed deer, a strange red frog, and a 'hedgehog sighting' aided by sleep deprivation, the trails were surprisingly quiet.

Darkness hit again as we descended Mt Kearsarge and made the final push to our cars. On soggy, sore feet we passed through the gated "no dogs allowed protected bear area" sign and pushed through to the finish for some much needed sleep.

It was an awesome adventure with bonus FKT.