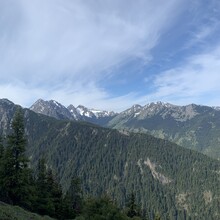 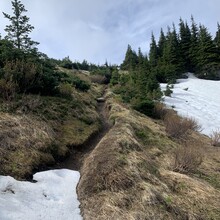 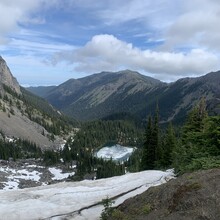 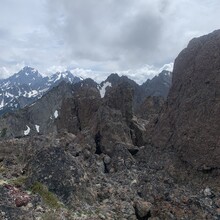 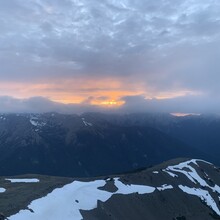 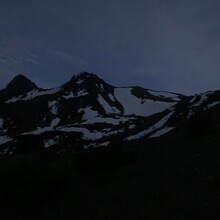 This attempt did not go as planned, but was completed nonetheless. It taught me a lot about preparedness, or in some situations, not being as prepared as one expects and working through that.

I started this unsupported attempt at the trailhead on Saturday AM, heading up the road a few hundred yards from the main trailhead to the Little Quilcene Trail and went straight into some decent climbing. Taking in views along the way as I climbed the ridge. Made my way to Mount Townsend pretty easily and down to Silver Lake. Not many people to see, a few hikers and campers. Ran into my first bit of trouble as I passed around Silver Lake and found myself in a great snowfield. Took me a while and a few circles to find the trail leading up to Hawk Peak. I felt pretty blind and my watch wasn’t overtly helpful, but I was able to find it eventually. The transition from Hawk to Iron Peak was also challenging. A ton of deep snow, lots of walking back and forth trying to figure out where the “trail” was, but again, I found it an trekked my way over. Wasted a good 1-2 hours trying to stay on course through these areas due to all of the late snow still up there.
From here, I soon realized how much scrambling I’d be doing. From other reports, I expected some and was nervous as I don’t have mass amounts of experience, but some at least. My first attempt up Iron Peak left me on the wrong side of the ridge, I had to go back down and up again to put myself in the correct area to traverse to Buckhorn. This was my hardest portion, followed by NE Buckhorn. Both took me a pretty decent amount of Tim to find the optimal routes to ascend. The traverse to Buckhorn Mountain then up and over ended up being much easier. I also think I started hauling because I took an immense amount of time to get there and I was way behind my anticipated schedule. Sun was starting to set and I needed to move. Made it up and over back to the Tubal Cain trail and started making my way the 7ish miles back to the trailhead.  Limited by some still remaining snowfields made tracking the trail pretty hard until I hit the tree line. There were some foot tracks to follow, but I could tell I wasn’t directly on trail, which I didn’t mind as the snow was soft and I was post holing quite a bit.
As the sun went down, my own personal lighting was failing and ultimately went out 3 miles from the trailhead leaving me in complete darkness. I managed to use my watch backlight to light the trail which is luckily well maintained and seen. I had 2 folks waiting at the trailhead knowing I’d be late as I was able to send a few texts and GPS messages from my Spot so they knew I was okay. I rolled in early the next morning, tired, hungry, dehydrated, and pretty beat up from the sharp rocks. I made it.

I had read up on everyone’s reports. I had made notes on the trail. I looked at maps. I packed gear. I packed extra food and water than I expected to need. I used it all. I filled my water bottle with snow and from the rivers when I reached them again. I had people who knew where I was and I communicated with to know I was okay/going to be late, etc. I did not have extra lighting once mine went out (I had expected to finish roughly 7 hours earlier, not coming into the morning). I severely underestimated the scrambling. I took my time. I didn’t rush. I found my place, my footing, my routes. There was still a ton of late season snow up on the route. And overall…This was the hardest thing I have done to date.
Be safe out there.