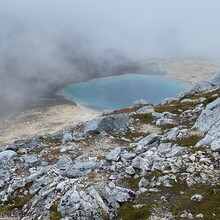 Start Time: Picked up via float plane at trident basin around 7:15am. Took flight over to Terror Lake where I was able to start running by 7:43am.

Journey: Took standard route as described in the route description for Terror Lake to Town. Couple areas of fog and low visibility conditions. Otherwise mostly clear with no hiccups. I was able to refill water from high alpine streams which I did so twice.