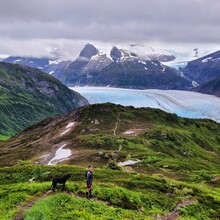 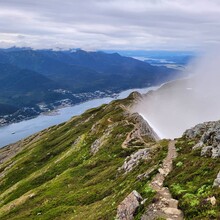 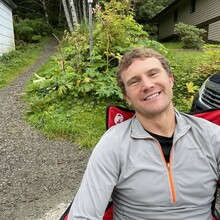 With the way my schedule worked out, these few days were my window of opportunity...rain or shine. Word gets out and next thing I know, local legends John Nagel and Owen Hatcher are signed on the support me. They are the real winners here because this would have not been possible without their moral support and ability to be on call 24 hours a day for me. Even Rainbow Foods, a local grocer, offered their support! Never have I ever seen such local support from a community for something like this before!
Started at about 5:20AM at first light at McGinnis Trailhead. John, his dog Quinn, and I finished that in about 5 hours. Very cold and windy, no visibility from about 3k ft to the summit at 4,200 ft. Met with Owen in the parking lot to resupply. I ran the 3-4 miles to the Thunder Mountain Trailhead. John originally planned to go just a few minutes up the trail with me because he had work commitments. Before you know it, we summit Thunder Mtn together, a short and steeper climb, about 3k ft, and descend an uncharted route that will end me up closer to the downtown trails since that's where I was headed next, some great local knowledge from John! Owen had car troubles, but eventually met John (who I made late to work ?)  and I while we were heading through Lemon Creek. Owen took John back to his car and I carry on towards downtown, about 7 miles on foot. Owen catches up with me a couple miles outside of downtown to resupply. Some blue sky actually started showing at this point, a very welcome change to how it was! Rainbow Foods was the next stop where I ate a giant, tasty burrito knowing I'll be hiking up Mt Roberts next, a longer 9 mile round trip mountain with just over 4k ft of elevation gain. Brought out the trekking poles once I met up with Owen at the parking lot for Roberts. Quite a bit of time has gone by since Thunder Mtn due to the sheer distance to the next mountain so I was looking forward to getting off the road and back up high! I was frequently reminded to not stop at Gastineau peak, but continue on another mile over a saddle to Roberts. It would have been easy to mistake one for the other as this was my first time up there. Zero vis and windy up high, but best views of the entire route opened up in front of me as I was headed down! Late day lighting over Gastineau Channel with a tiny cruise ship headed out the channel was surreal! Hallucinated a lady sitting on a rock ahead of me, but next time I looked it was a cairn. Met Owen and his wife, Emma, at the bottom of Roberts after a round trip time of about 4 hours. Last light was at that time so I got my night gear ready and carried on to Mount Juneau. I did this mountain recently so was comfortable climbing up the exposed mountain side with the light of downtown lighting my way. Obviously not down, though ?. Got a bit concerned at the summit of Mt Juneau when the wind and rain really started picking up, even harder than it was on McGinnis, so made the summit stay brief and booked it outta there. I got the living daylights spooked out of me when I was running down and just about stepped on a porcupine making its way down the trail...also got spooked when I kept hearing what sounded like conversational voices coming from the trees. Literally hearing voices in my head at this point...those middle of the night spooks like that always get me in these runs. I was looking forward to having John join me for the final mountain after this. Met up with Owen again after a Mt Juneau round trip in three and a half or so hours. Everything that followed this past midnight was 99% mental mode. The 4-5 mile road run from downtown across the Channel to Douglas and down to the Mt Jumbo trailhead was something I really could have done without. Now once I got to Jumbo trailhead, I knew the whole day this was going to be the beast. Took a while to resupply with Owen and meet up with John and his now two dog companions, Roo and Quinn. If I can relate this mountainous rooty, muddy wonder to anything, it would be the "HURT 100 course in Hawaii on steroids" according to John. Absolute slog  up a steep rooty uphill with hamstrings shot, glutes shot, lower back spasming up from a hard effort up the last mountain I did (Mt Juneau). Dogs make great companions because they pick out the best line up a technical part when your brain is not all there ?. The summit, around 3,500ft, was not as windy thankfully as Mt Juneau was, but I expected it to be better, too, because the moon and some stars were peeping through the clouds. Downhill was just as slow with my quads shot and technicalities. Overall about 7 hours round trip with a finish of Juneau's 5 peaks.