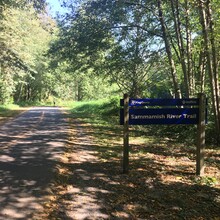 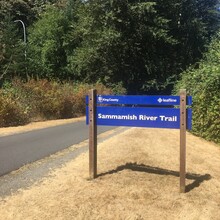 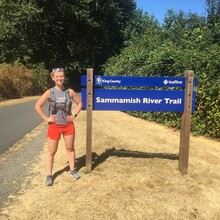 This run was part of the Women Who FKT challenge that took place from July 15th to August 31st. This was my first time running on this trail and my first FKT attempt!

A large portion of the trail is out in the sun, but there are some shade breaks. I ran later in the morning/midday and wish I would have brought a little more water. To be light I packed just a bottle but easily would have drank more if I had my water bladder on me.

There were at least 3-4 opportunities for public bathrooms which was nice in case of emergency. One at the beginning at Blyth park, porta-potties near the baseball fields at the end, and I passed other facilities and porta-potties in the parks that were along the route.

In previewing the route I knew there would be a few times that the route crosses the river so at most bridges I stopped to check which direction to run. Although the trail was pretty well-marked, there are a couple of opportunities to cross a bridge that would actually take you off the FKT trail. Most of the bridges you want to cross are because the trail simply goes that way and it gives you no alternative. Otherwise, follow signs for Sammamish River Trail or Marymoor Park.

Now that I know the route, I'm eager to come back and beat this time!

(Beginner mistake: I goofed up and paused my GPS watch at the end but did not "stop and save" the activity until 25 seconds later, so that added to my overall time. Whoops!)