The Sammamish River Trail is a popular 10.2-mile trail connecting Blyth Park in Bothell to Marymoor Park in Redmond.

"The trail passes through a number of green spaces, including parks, sports fields, and agricultural land. There’s a surprising amount of wildlife to be found along the Sammamish River. Salmon, turtles, and beaver can be seen in the river. Eagles, hawks, herons, ducks, and geese can be found above the river. Frogs, weasels, bunnies, and deer can be seen along the river. Trails like this are great when you're looking for a little exercise and connection with nature but don't have time to get out of town."

For FKT purposes, the exact start and finish points are the big blue signs (photos attached below) where the SRT connects with the Marymoor Connector Trail at the southeast end and the Burke-Gilman Trail at the northwest end. Runners can go either direction. 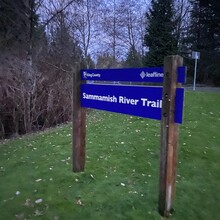 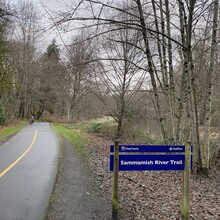