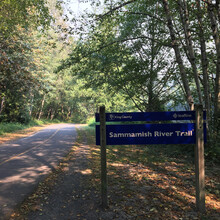 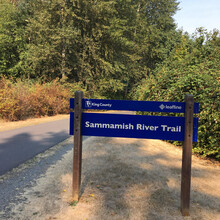 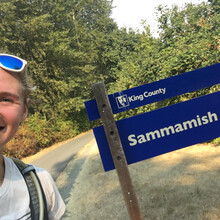 Warm day for a run! The forecast for Bothell/Redmond was to reach 90 degrees so I filled up my 2-liter hydration pack. I parked at Blyth Park and started at the Sammamish River Trail Sign in Bothell then ran to the sign at Marymoor Park. Gained a little extra mileage by running to a porta-potty a little ways off the trail at Marymoor.

I heard about this trail via the Women Who FKT project. The two women who ran this out-and-back in June were an inspiration to follow in their footsteps.

There was an event today on the trail, the first annual "Eggbeater 5k" that started at Bothell Landing. Someone dressed up in an egg costume and people tried to beat it back to the start! Fun energy at the beginning on the trail.

Sadly there have been recent wildfires both in the State of Washington and in neighboring states as well. The day before this run, it became hazy in Seattle but not "Unhealthy" yet according to most air quality websites. When I started this run in the morning there was only an advisory for people who are sensitive to poor air. By the time I returned to my car, there was ash in the air and compiling on parked cars. Perfect timing to spend the rest of the day inside and recover.