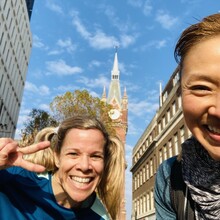 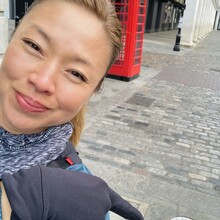 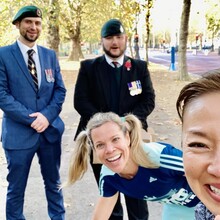 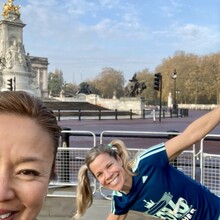 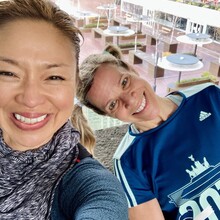 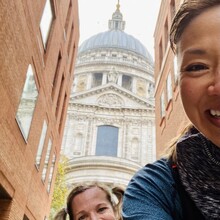 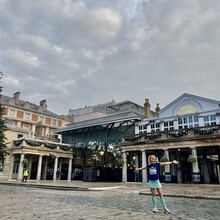 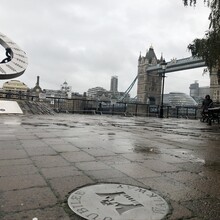 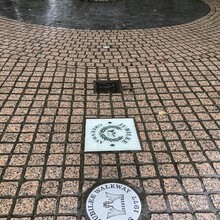 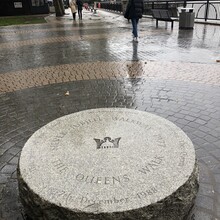 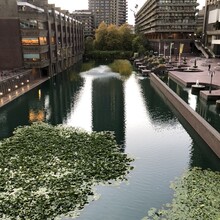 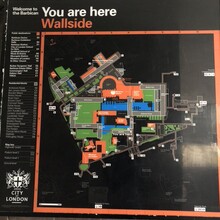 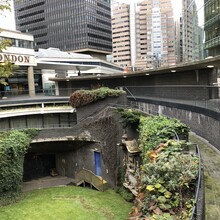 Kelly and I met at Covent Garden at the start of the well-known circular route. We ran anti clockwise, to say hello to the Queen at the beginning of our adventure:)

It is the Remembrance Day today - this led to us having to take a significant detour since the route around Buckingham Palace, St James Park, Horse Guard Gate and White Hall were all blocked by the guards and police, which we only found out when reaching Buckingham Palace.  The detours we had to take resulted in having to run over an additional 2km, going down to Victoria Embankment, and finally back on the route at Westminster/Parliament Square. However, it was cool that we got a picture with 2 soldiers who would be attending the ceremony later today.

The routes were serene and quiet, the sky cleared out after last night's rain but were still a bit foggy. We enjoyed running around our city London so much! We chatted throughout the entire route, talking about how much we enjoy sharing these moment together! Seeing, the beauty of the architecture over the centuries was so nice: the English Baroque style of St Paul's, the French Neoclassical Buckingham Palace, the Brutalist style of the Barbican and the Neo-futurism style of the Shard. We also got to come across numerous historic landmarks, the natural beauty of the River Thames and the autumn leaves in St James Park. We have so much to share with all of you from this experience!

The route could have been a bit difficult for anyone unfamiliar with London but with GPS and Google Maps, it can actually be done by anyone. I recommend visiting monuments along the way as well. Because of construction works (so many here!) and ceremonies, running an extra mile here and there might be necessary but getting lost is also the fun part!

Kelly and I would like to mention that we also posted the "Step-Free" GPS route.

I ran along the way on the 16th of October by myself to make sure I knew the route well enough. Parents with buggies, or members in wheel chairs could also easily attempt FKT! There are many accesses to elevators which you can take to go onto the Highwalk in order to enjoy the view. My personal favourite is the sky pathways over the walls at Barbican, this place was our super cool discovery. The view there over the water is amazing!

Below is the history/explanation of Jubilee Greenway from both official and non official websites;

Jubilee Walkway contains some of the most iconic London landmarks.

-Here is the link to Transport For London about Jubilee Walkway:

-There is a website dedicated to Jubilee walkway: http://jubileewalkway.org.uk/

which says about this route:

The Walkway was first developed for The Queen's Silver Jubilee in 1977 and The Jubilee Walkway Trust was then set up in 1978 as a charity to look after its interest in partnership with strategic and local authorities.

From Buckingham Palace to the Tower of London, the Jubilee Walkway has circular silver plaques set in the pavement, which guide you in the right direction. Along the route there are information panels describing the surrounding buildings.