The Jubilee Walkway is an official walking route in London. It was originally opened as the Silver Jubilee Walkway to commemorate Queen Elizabeth II's accession; the Queen herself opened it on 9 June 1977 during her silver jubilee celebrations. The intention was to connect many of London's major tourist attractions and it is now one of seven such walks within the Mayor of London's strategic walking routes. The Jubilee Walkway Trust was set up in 1978 to look after the trail, in collaboration with local authorities. In 2002, during the Queen's golden jubilee, the renamed Jubilee Walkway (the word Silver was dropped as appropriate) reopened after refurbishment and a new spur walk was opened in 2003, called the Camden Loop, which took walkers into north-west London. 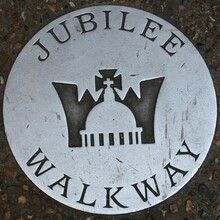