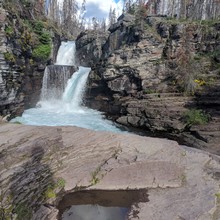 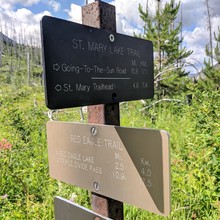 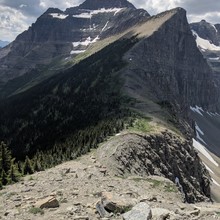 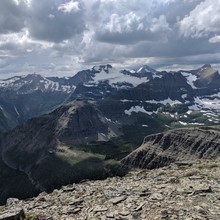 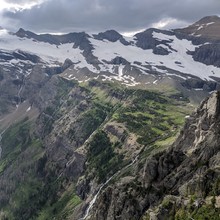 I had never been in this area of Glacier before, and onsighted the route. So, I think I did a good job of picking the route but there is undoubtedly room for improvement. My goal in submitting this effort is more to put this route out in public for improvement and discussion rather than saying this is the set-in-stone way it should be done. For instance, there are three named peaks along the traverse that I did not climb because I either felt they were unnecessarily out of the way, or because I was out of food, tired, and couldn't be bothered! These peaks are Peak 7912, Liberty Bell, and Clyde. I will be curious to see if future efforts deem these peaks necessary or if folks think other modifications to the loop would be an improvement.

In addition to the routefinding, my time could also be improved on with a more focused effort. It's hard not to spend a bunch of time taking photos and whatnot. But maybe someone with more willpower than I can do it.

I started at the Saint Mary Falls trailhead, ran east along Saint Mary Lake until merging with the trail leading to Triple Divide Pass. From Triple Divide Pass you leave the trail and begin the Norris Traverse, which is along the ridgeline to Red Eagle Pass. From there, the Scenic Death March is the section between Red Eagle Pass and Logan Peak. See J. Gordon Edwards' classic book "A Climber's Guide to Glacier National Park" for descriptions of the Norris Traverse and the Scenic Death March. After summiting Logan, I dropped down into the basin draining the Blackfoot glacier, then contoured into the basin below the Jackson glacier. From here you connect into the Jackson Glacier spur trail and descend this trail to Gunsight Lake. From the lake it's all trail down to the trailhead.