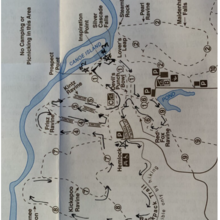 It is very necessary to do a recon loop before you attempt this and if you aren't familiar with the route, the previous FKT holder Ryan Horner wrote out some important instructions and left a picture of the map that I included.

Ryan's instructions are "There are three really important route notes to make sure you hit the intended route. I've uploaded a crappy picture with numbered stars for each of the spots that tries to clarify the route for those interested. First, at the start, make sure to start very close to the west side of the hickory parking lot, even though there is an alternative further south that would cut time. (This is the picture with the speed limit sign). At the Prospect point area, there is a shortcut that cuts off the pointiest end of the trail out to the point, but don’t take this as it isn’t part of the intended route. Third, after inspiration point you must take the left turn down a big flight of stairs to the bottom of the ravine, then run up the creek bed. Staying straight (and on top of the ridge) instead of going down the stairs would theoretically give you a similar gps track but is not the intended route and would be cutting 2-4 minutes of stairs and creekbed running off. It would be possible to make these mistakes accidentally even with knowledge of the trails, so it’s vital to be aware beforehand and honor the challenge. Another thing: there doesn’t seem to be anything official on this on the FKT website, but I used the pavement on separate ends the hickory parking lot as the start and finish of the route."

Before hiking the route, I very much underestimated the terrain and thought the challenge was in the elevation gain. I quickly realized that the ravines are actually ravines and running through creeks literally means running through them and not crossing them. Even if you have the legs, your speed is going to be limited by how sure footed you are on the rocks or how crazy you are. Overall, this run was a lot of fun, especially because of all of the variation in the terrain. I don't think it's out of the question for someone to go under 30 minutes on the right day.