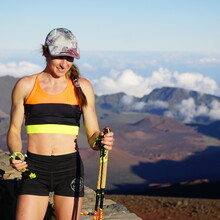 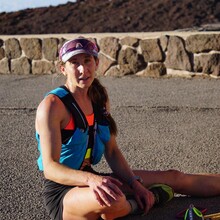 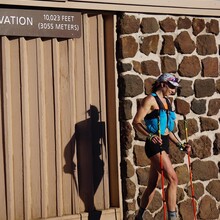 The start in Kaupo around 11am was in the 80s without a cloud in the sky. The first few miles were miserably hot and it was clear early on that 2 liters of water was not going to be sufficient for the hours ahead. I got lost pretty early on around 3.5 miles and basically climbed out of a tree to find my way back to the "trail." Miles 4-6 are easy to navigate with good footing. The only problems were the sun exposure and angry cows that didn't want to move off the trail. Starting a little past 6 miles through almost mile 10 is the tricky, very overgrown part. I was wearing shorts, so my legs got mercilessly cut up by all the thorns and branches. I thought about turning back a few times given how overgrown it was, but I also thought it would clear up and I didn't want to go back though the bushwacking. A few colored ribbons marked the trail, but trail finding was still challenging. Around mile 8 I tried to text my ride, Karley, to let her know I was going way slower than expected. I figured I'd be finishing in the dark and might need her to hike down with water and layers to save me. For most of those miles I thought the FKT was out the window and I was much more concerned about making it out of the woods and not getting charged by a cow or boar. Getting back onto runnable, open terrain was a game changer. 8-12 min miles were all I could manage, but at least it wasn't walking. I ran out of water around mile 11 and knew I was going to feel pretty terrible by the top. The mantra of the day was "just keep moving." That I did and I finally made it to the top, albeit with calves cramping, dehydrated, and my legs cut up. I met Karley and Andy at the top where I heard Andy had a worse day than me. He started his attempt a few minutes before me, with about half as much water and became so dehydrated he had to lay down on the trail several times in the last few miles. He told Karley at the top "I quit running." So when Karley saw me pop out onto the road, a few hundred meters to the top, she was a little shocked. They expected to hike down and find me in equally bad shape. I think backing off the pace early on to keep my heart rate down was pretty key to making it up in relatively ok shape. I did, however, spend the next hour laying down in the back of the car thinking I would throw up at any moment. Prior to this run, I was told the start was on the "hot side" of the island, but Andy and I were more concerned about the weather at the top and failed to actually check the temperature in Kaupo. We also had to drive 2 hours from our hotel to the start, which also delayed our start time. This was certainly not the best time or year to run this trail. I hear in other years the lower miles are not so overgrown. I can imagine cooler temperatures, a more packed down trail, not getting lost and bringing an adequate amount of water could make for a much faster day on this route. Still, it was quite the adventure and ended up being physically challenging in ways I would not have expected. At any rate, running from the ocean to the top of a volcano is pretty cool.