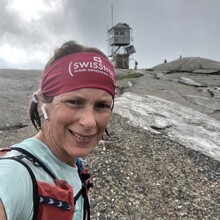 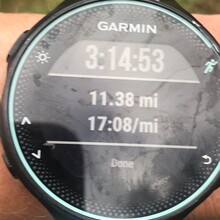 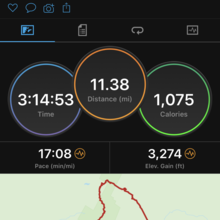 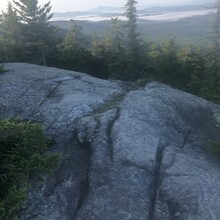 This was my 2nd attempt at this route. The first one was last weekend and thwarted by navigation error. I began this at 6:35 am. I wanted to start earlier to beat the heat and the crowds but it turned out okay, with only higher numbers of folks on the return off of Cardigan. I was careful to wear my mask when passing others. My UD Race Vesta was filled with 1.25 liters of Tailwind. I managed to finish all of it just before finishing. I also had 2 honey stinger gels on the backside on the Back 80 Trail. I was stalled a bit trying to be sure of this Back 80 trail. I detoured off the Mowglis trail when I smelled smoke and investigated a lightning strike which was still smoldering on a cliff. It looked like it had been tended to so I backtracked to the route and continued. The temps were in the mid to high 60's with high humidity. There was a thick layer of fog at the start but this disappeared after climbing up the trail. The route was damp, with wet rocks and roots from a previous evening of rain and thunderstorms, yet my Hoka One One Evo Mafate 2 seemed to work well despite their high mileage. Because of the slickness, I was a little more conservative on the downhills. All in all a great few hours in some beautiful parts of NH. I am pretty sure I can shave off a chunk of time now that I know the route. I am looking forward to returning in with the changing of the leaves.