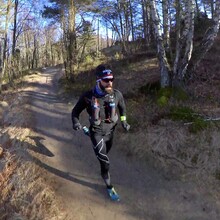 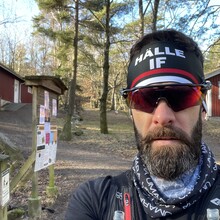 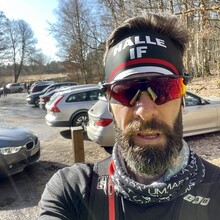 I have had thoughts of an FKT attempt on the Sandsjöbackaleden round trip for a couple of weeks since I saw it on the fastest know times Facebook page but first the weather was bad and then it didn’t fit in the family schedule.

The day before I mentioned it to my family, got an ok, and decided to give it a try. I had never run the route before and I do not know the area well which meant I had to rely on the GPX file to my watch. I study the map and I figured, based on the other attempts that it should be possible to do it around 3:30 if I had a good day so I planned fueling accordingly.

On the day of the attempt, I woke up tired since two of my kids woke up in the middle of the night and had night scare but after a big cup of coffee and some breakfast, I felt ready. It looked like a good day ahead, around 3-4 degrees Celsius and sun but with some strong wind. I opened the first section relatively fast to get into a good rhythm. After 10k I slowed down a little bit since I was way ahead of the current leader time. Everything went well but I missed some sharp turns and had to trace back to get on track again but nothing big. After about 16 km, I thought that this is relatively easy but then I hit a rough section with undulating technical terrain that made it difficult to keep a good rhythm.  All of a sudden, the pace went from low 4 min/km to low 5 min/km and I had a low point mentally since I knew I would run back the same way 😞. I kept going though at a descent pace and hit the turnaround in 1:33.

The return went pretty well, I kept going at a steady pace but again missed some sharp turns.  On the way back I met a fellow runner that looked like he was on a mission to set an FKT which made me speed up a little (turns out I was right and he ran in around 3:31 J).

At around 33-34km I got and an idea to go for sub3: 10 but it was harder than I remembered and I managed to run wrong in a couple of places again (including 500m from goal 😂). After 42.5 km I finally ran in at 3:11 which is a new FKT. Fueling wise I got a total of 180g carbs and 1l water and even though I wasn’t super tired I was quite thirsty so probably should have had more water