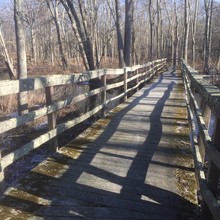 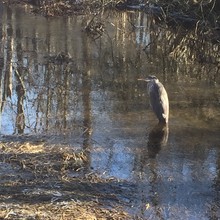 Time is from my stopwatch, which is better than Strava.  This trail is close to my family's home, and I have run parts of it over the years but never figured out the whole thing.  It links up a bunch of different conservation lands, and intersects many other trails.  The area between Blinn Rd & Croton Dam Rd is especially confusing, and even though I'd run through there "clean" just a few days ago I messed up the route in both directions this time.  I started at Rte 134 since that's very close to the house, and ran north at a rather leisurely pace to the turn-around just under 2 hours.  Then I ran "FKT pace" (faster, but still not very fast) for the rest of it.  Conditions were very cold - about 8 degrees F at the start.  The ground was frozen, which is better than mud, but some sections were icy and there was a dusting of snow.  There were also sections of 3-4" deep surface hoar frost which made for interesting footing.  I think this may be the first time anyone has run the entire trail end-to-end?  That's not right, since it's really a very nice trail!