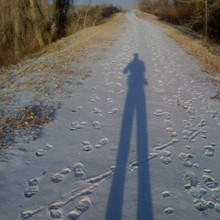 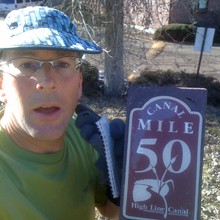 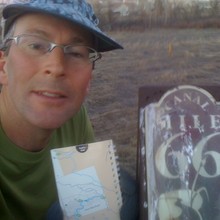 The winter of 2009-10 was usually cold and snowy in the Denver metro area, leading to many area trails being either icy or muddy for long periods. Because of this, I started doing a lot of "urban" running, frequently on the well-maintained bike paths around Boulder and in the Boulder-Denver corridor, culminating in two 37-mile runs from Boulder to downtown Denver, mostly on bike paths (with return via public bus). On one of these runs it occurred to me to run the HLCT.

While there is excellent and frequent bus service between Denver and Boulder, getting to and from the High Line from Boulder is much harder. On weekday mornings a public bus (RTD route 63X) runs to the Lockheed-Martin plant, 3/4 mile from the start of the HLCT. It's not exactly convenient, and took me over 2 hours to get from my home to the start of the run. At the other end, there is half-hourly bus service from close to the end of the HLCT to the 40th and Airport Park & Ride, where there is a direct bus back to Boulder -- sometimes. It took me 2.5 hours to get home after running the trail, including a visit to Denver International Airport!

Compared to the transportation issues, running the canal was easy. With one exception, the route is obivous -- you just follow the canal. Any questions are quickly cleared up by consulting the Denver Water guide. The tricky bit comes at Mile 8.6 where the canal disappears into a siphon to cross an extensive low-lying wetland area. The work-arounds for this section are long, cumbersome and unaesthetic (private property, busy roads). The obvious choice is to simply cross the wetland, which is of course both really hard and un-ecological -- unless the wetland happens to be frozen, such as on a cold January morning, when the crossing is direct and straightforward. After the wetland and some private property, the trail resumes at Mile 9.8.

This is a surprisingly good route! Up to about Mile 50 it is especially nice -- rural, peaceful, lined with cottonwoods, and with frequent big views of the city and the Front Range of the Rocky Mountains to the west. After 50 it becomes a little more "urban" feeling, though part of that is probably the cement. Besides being tough on the legs, running on cement just feels more urban because you get the impression you are on a sidewalk. Around Denver, everyone has run or biked on the HLCT, but I have never heard of anyone running the whole thing. While 64 miles is definitely long, the trail is basically flat, the surface is good, and resupply is easy, so this is a good winter project -- especially if you can get someone to drop you off and pick you up!