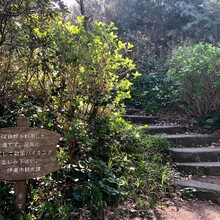 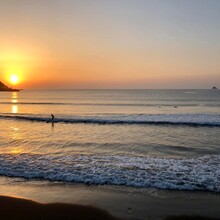 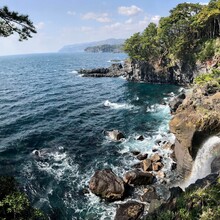 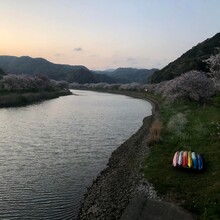 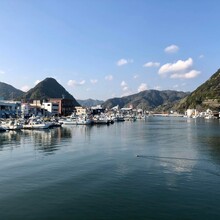 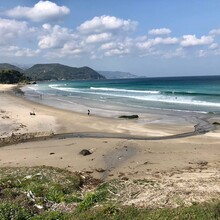 I camped Friday night at Usami Shiroyama Park Camp Field on the northeast side of Izu Peninsula and started the run early Saturday morning going south. The east coast of the peninsula has numerous scenic beaches to see the sunrise over and involves running mostly on sidewalks or road shoulders.  After passing through the town of Ito you’ll enter the amazing Izu Peninsula Geopark, 10 miles of forested coastal trails are a welcome break from the concrete running at the start. Continuing south you’ll reach Shimoda where the route takes you through Shimoda park, an excellent spot to learn about the history of the area while enjoying the beautiful flower blooms and sights of the harbor. After Shimoda on the southern part of the peninsula was one of my favorite stretches- 50 miles in and you’re on backcountry roads with minimal car or foot traffic. Going north up the west coast there are outstanding views of Mt. Fuji and at the end of the route are some of the toughest hills. For me Izu was as much a sightseeing/exploration endeavor as it was a long run. Running is truly one of the best ways to experience a place! I ran solo for the duration of the run.

*About 6km after Shimoda the route goes south onto Route 16 rather than continuing west on Route 136 to Minamiizu. At that turn onto Route 16 is the last convenience store (Seven Eleven) until Matsuzaki, ~50km later. Make sure to stock up on food at that Seven Eleven, depending on how fast you’re going it will take several hours to cover those 50km and reach the next convenience store for food.

**Vending machines are also scarce on the above mentioned ~50km section. Ensure to load up on water/electrolytes before making the turn south onto Route 16.