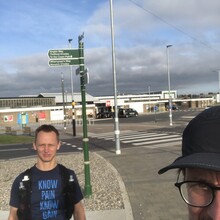 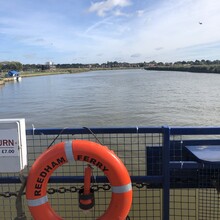 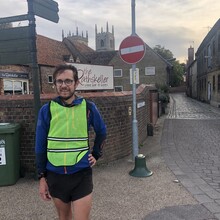 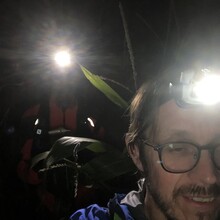 I set off from the signpost outside Great Yarmouth station with my first companion for the run Matt Collier.  Together we ran Wherrymans Way in its entirety, only stopping to meet crew (Faith Pearce) at Loddon for a top up of water etc.  Running into Loddon the route took us through the church yard, which seemed to be hosting some sort of fete and us two sweaty runners grew disgruntled looks!   Minor diversion to the path out of Loddon where they seem to be working on the river bank footpath.  Chatted to a resident who seemed pleased to escape the clutches of his wife for a few seconds.  An hour further on out of Loddon and we were a little demotivated to see a road sign pointing back to Loddon 2 miles away.  Remaining miles of Wherrymans very pleasant, passing by plenty of pubs on the Broads, eventually coming into Whitlingham, and then Norwich.  Another pit stop for food, change of shoes, more fluid etc and to say goodbye to Matt who’s job was done.  I then followed the riverside walk past Cow Tower, all the way to the start of Marriotts Way where I was met by my next set of pacers Mark Thorpe and Faith Pearce.  Also my wife who’d managed to procure me a vegan ice cream!  Once ice cream dispatched with we started running, Mark is just coming back from injury and had raced that morning so when I was running well he was struggling.  So I soon made it my evil plan to drop him by nailing a few decent miles.  At Drayton he succumbed and called his wife to collect him. A bit naughty of me, but I really appreciated the boost that focussing on a few hard miles gave me, and my wicked plan succeeding!  Faith carried on with me to Lenwade: an enjoyable run in the late afternoon sun.  More food and drink at Lenwade and then I set off with Neil Steaverly of Escape Trails to run Wensum Way in its entirety.  Neil was doing it as an out and back, this being the back, so his navigation made it so easy.  We had a lovely chat about all things trail and ultra and the miles flew by.  Before I knew it the sun was setting and we were completing the last miles into the car park just outside Gressenhall.  Another pit stop, and another change of pacer, with Neil leaving me and being joined by Lee Oxbury.  Lee hadn’t done any trail running before and was no good at navigation, but his company was much appreciated as we plodded the 20 miles through to Narborough.  It was slow going with the trail being overgrown in places, including a maize field we had to fight our way through.  Finger posts etc were increasingly rare and we’d often find ourselves the wrong side of a hedge.  Eventually Narborough arrived and the final change of pacer this time  I was joined by my long suffering wife.  Progress was now very slow as we plodded along the miles of grassy bank all the way through to Kings Lynn.  It was that exhausting time, pre dawn, and the miles passed by very slowly.  Eventually with the sun up, Kings Lynn came into view and the grassy bank was replaced by tarmac and I could run again, pushing hard over the last mike to finish under 23 hours.  A great little adventure, made much easier by my pacers and crew.