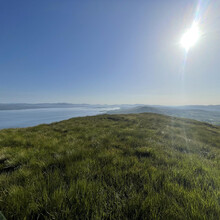 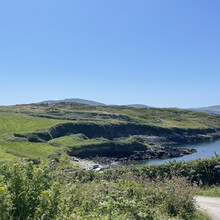 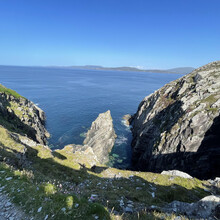 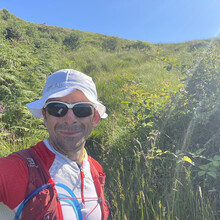 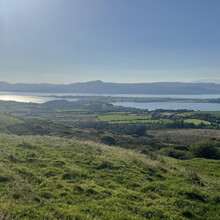 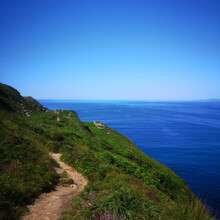 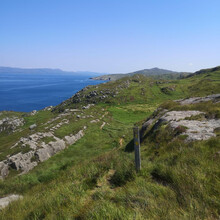 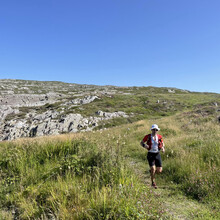 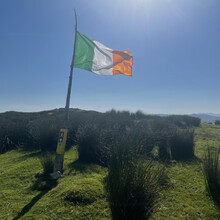 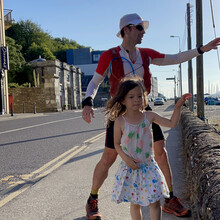 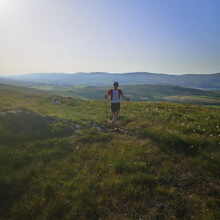 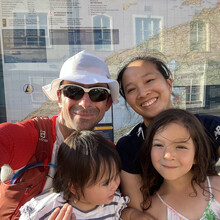 Sheep's Head was the last place that my family and I went before the first COVID lockdown in March of 2020 and since then, it's had special meaning to me.  The sweeping views and wild, rugged landscape make the peninsula seem so peaceful and untouched.  The thought of completing the entire Sheep's Head Way was first suggested by my friend (and running stud) Brian Buckley and only solidified earlier this spring when Conor O'Neill completed the entire loop and set the self-supported FKT in 21hr and 31min.  Brian and I compared our schedules a couple months ago and circled July 17th as the only opportunity to make the attempt.  Luckily for us, it landed smack dab in the middle of Ireland's heat wave!

The morning of, Brian and I started from Bantry a few minutes after 630am a bit perturbed by the locked bathroom at the start (oh well, that's why you always pack toilet paper in your pack!), and it was already hot and very humid!  The first few miles are largely uneventful, but I alarmingly did not feel particularly peppy or motivated.  Maybe it was the training over the past few weeks, the 430am wake-up call, or the weather...who knows.  It helped to get out on the trails after a couple of miles and get greeted by the beauty that attracts me to this area of Cork...views across the peninsula and towards Beara to the north; the area never ceases to amaze me.  My partner (Nu) and two daughters (Izabelle and Sierra) were going to meet us on the peninsula later in the morning to provide crew support throughout the attempt.  While a self-supported run was tempting, the weather forecast for the day was not conducive to running without a water re-fill in the first 25 miles (other than stashing water along the route, the only refill possibility is at the Tea Room  after the lighthouse around mile ~26.  We first met Nu at ~mile 14 and boy was I starting to cook in the heat!  Luckily, we had packed a lot of ice, and at the stop, I exchanged my trucker hat for a bucket hat filled with ice and that really made a world of difference.  Soon after the stop, I noticed a gap form between Brian and myself and, by the time I met Nu for the second time around mile 21, we'd lost contact and I wasn’t sure how far behind he was (later, I came to know that he smartly took advantage of some of the few shady spots to cool down!).  I shot him a text to see if I should wait, but he urged me to carry on…so I did!  Although I could feel the heat, the humidity had lowered quite a bit from the early morning hours and with the ice refills in my hat I was feeling good and started embracing the experience.  I packed away my trekking poles into my bag and began running with a bit more conviction, even the uphills.

And so it went for the next several hours, enjoying some additional stops along the way to get ice, water refills, and food (almost exclusively a diet of avocados and chips and coconut water) from Nu.  Although my memory is a bit foggy, we met several times:  parking lot after the lighthouse at mile 26 (although we didn't run together after mile 16 or so, Brian carried on until dropping at this point); before Kilcrohane around mile 30; near Ahakista at mile 37; near Durrus at mile 46; and a last stop at the N71 intersection at mile 52).  I don’t think my pace or exertion level changed much through the course of the run due to the heat or fatigue.  Rather, I was more at the mercy of the route, which at times was overgrown and hard to follow, and at other times went through fields with angry (or friendly?) cows.  The stretch between Kilcrohane and Durrus, although largely flat and void of any big climbs, featured brambles, grass over my head, and many fields.  This was quite slow and frustrating of a section!  The final stretch between N71 and the finish is all pavement with a couple climbs but none of any significance.  This was a great stretch for reflection and just savoring the experience and, of course, thinking of the pizza and beer that I would enjoy shortly after finishing!  The Bantry house gate was closed when I reached the town (around 715pm), so I had to take the same route around that Conor O’Neill had taken in his FKT a couple months earlier.  I had studied his route, so this detour was no surprise and adds about 1km to the total distance.  The final stretch is on the sidewalk by the water and seeing Nu and the girls in the distance was the most welcome sight!  Izabelle ran to meet me a few meters from the finish, and we ran hand-in-hand for the final few steps.  I’m so thankful that Nu and I are so like-minded about running and that I get to experience these adventures with my entire family.  It certainly adds to the experience and fulfillment that I get out of it!.  When I touched the board, I glanced at my watch and saw just a touch over 13 hours…13 hours, 1 minute, and 12 seconds to be exact.

Not a bad day’s work and certainly would have been a lot slower and more uncomfortable had Nu not been able to crew and give me crucial ice throughout the day.  Personally, I think breaking 12 hours would not be too much of a stretch for myself in cooler conditions, and a top runner could flirt with 10 hours on this route.

I'm only seeing this now Remi. What a lovely report and an amazing time! I'm glad my info was useful to you. Those cows, OMG :-)