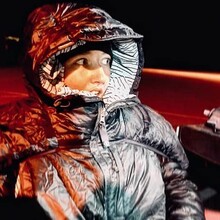 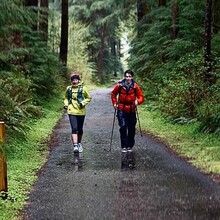 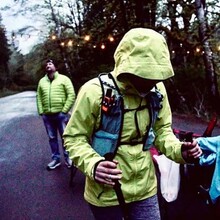 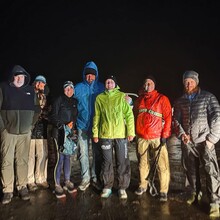 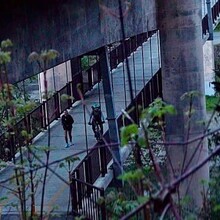 On May 14th at 7am, I set out to run the first recorded FKT on the Olympic Discovery Trail and finished in 41 hours and 29 seconds. This trail is very personal to me as I attempted to complete it in 2019 as a 17 year old - I stopped at 82mi because I got a stress fracture. Ever since, I have been obsessed with this trail. Every effort I did between then and now, was only for the ODT. So, when I ran past mile 82 on Saturday, I was overwhelmed with emotion. I was running past the spot where I once felt the most defeated.

I ran for two days. The first day was perfect- blue skies and warm coastal winds. The second day was the complete opposite... A huge rainstorm came up on my crew and I, just after the Lake Crescent section and it lasted until I finished. We were all drenched!

I am so lucky there weren't any major issues with this run. I got blisters on every toe, on both feet, by mile 40. My Dad helped pop them at each crew spot so I could continue with less pain.

Herman, Jeff, and Troy were my pacers- They alternated from mile 20 to mile 135. Herman mostly rode his bike, ran 11mi in his vans, and had a playlist of Kanye West and Yung Gravy playing in his backpack. Troy ran the 50mi Tiger Claw Race that morning of his pacing - he is a beast! And he brought me the only warm food I had along the route! Jeff helped me get through the long and most grueling stretches along the route. He is such a great storyteller! We were both hallucinating but, we swear that we saw a mountain lion near Lake Crescent. I can't thank the three of them enough.

I also want to thank my Mom, Dad, Grandma and Grandpa, and Viv for helping out logistically. You guys force fed me, massaged me, reassured me... You guys were the backbone on the FKT.

This was an adventure of a lifetime and I feel satisfied with my effort along the ODT. I can't wait to see who tries to attempt it next!