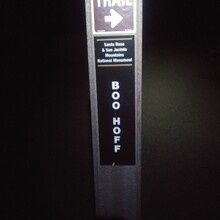 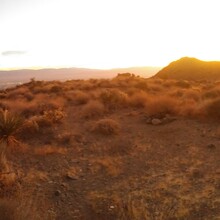 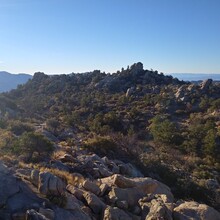 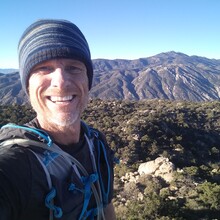 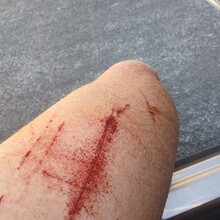 As usual, I started this solo round trip up Martinez Mountain before dawn. I wanted to get off of the valley floor before I felt the warmth of the desert sun. My heart rate was unusually high as I got started and it took a few miles before it would calm a bit. Had a great time making my way up Boo Hoff without a soul (or headlamp) in sight. It got a little tricky as I connected to the Guadalupe Trail. I’ve been on this trail quite a few times over the years but it still demands respect, especially in the dark. I picked up some cactus on my shoes and hands but that’s sort of par for the course. I tried to pay attention to the worse areas for those prickly balls for the faster run down later. As the sun peeked out over the horizon, I was nearing the old Cowboy Camp and planning on my cross-country route up the NW face. I’ve been up and down this peak from multiple directions but I had never pushed for time so I opted for traversing a little bit of rocky/brushy ridgeline into a very steep and loose ridge without brush. Not sure how much difference either made because it’s tough going regardless. Definitely glad I brought my poles and gaiters for the sandy ridge! I was happy to see a few patches of snow left. I topped out on the outer ridge and found the summit block about .25 miles south through boulders and brush then summited the backside 3rd class corner.

After signing the register, taking some pics, rearranging gear and taking in the view of the Coachella Valley and Salton Sea, I started down the summit and began running down. I took a chance on a different route down off the peak because it looked good at first but it soon turned thicker than I was hoping. Trying to hurry through open lines between pinyon, scrub oak and manzanita, I finally made it back to the sandy slope and had fun skiing down and sketching out over loose boulders that could've done some real damage if anyone was below. I made it to the lower drainages that lead back to Cowboy Camp and managed to only faceplant once. I dropped into the gully above the Cowboy Camp which is not awesome because it's thick in that section. It's better to not cross the gully until you reach the camp. Once there, I hopped back on the Guadalupe and did my best to stay with the trail which is not easy when you're already focused on the loose, sharp boulders, brush and cactus, but it sure is fun trying! Once back at the Boo Hoff, I began to feel the heat. I started in the 50s and finished in the 80s. Since the Boo Hoff is easier to follow, you can open up a little more on the way down. I finished in just over 5 hours with nav challenges, pulling cactus and meandering at the top a little. Hoping next time to knock off at least 30 minutes.

A really fun/tough morning on a beautiful mountain !!

Oh, and when I got home, I realized I dropped a pole somewhere on the Guadalupe. Thankfully, I found it a few days later about 5 miles up trail. Nice excuse to go back!