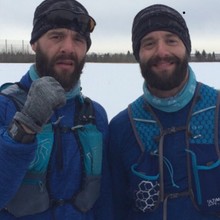 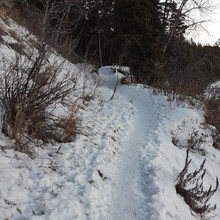 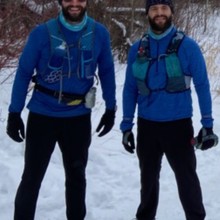 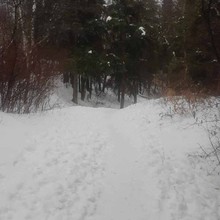 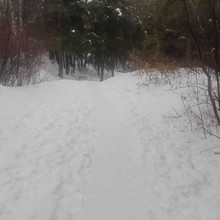 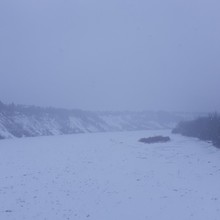 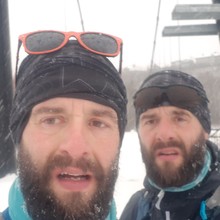 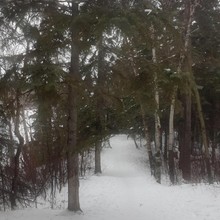 We (myself and my twin brother Chris) started our attempt of the JAT @9am on February 1, 2020. It was a rather comfortable 0 degrees Celsius with winds gusting up to 60km out of the west with snow and rain expected throughout the day.
It had not snowed in a few days and the trail was well travelled and very easy to follow, it was rather icy but with Kahtoola micro spikes the footing was fine. After about 8km the snow and the rain began to pick up and the visibility deteriorated. At this point we crossed the Terwilliger Park Footbridge and happened to run into our good friend (wife’s cousin) and training partner Jesse Jacobson, he was just out kicking ass and gave us a high five as we ran by.
As we continued the trail led through the trees and this helped to keep the wind and the snow from effecting us too much. After an hour or so the weather cleared up and the run continued as planned. At about half way, kinsman Park, our families were waiting to greet us. Mom and Gene (step Dad), Tracy (wife), Frances (daughter), Lisa (brothers wife) and Avery (niece) were there smiling and offering hugs and photo opportunities. We were able to fill our water bottles at the park we quickly got back to work.
Things continued to go well, we did have to make a couple detours. Once at Nellie Mclung for trail construction and once in Cloverdale for the bridge construction. From there things went as per plan and we crossed the river at Rundle Park. Rundle and Hermitage park trails were easily followed and we made good time under the Yellowhead Trail until the Fraser Ravine. The Fraser Ravine did force us to detour onto the multi-use trails as the single track is not easily/safely followed with the amount of snow we have had this winter. After that it was pretty smooth sailing to the end where we had our families (now including our sister Rachel and niece Brooklyn) again waiting to see us, take some pics and give us a ride home.