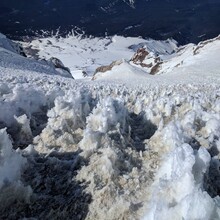 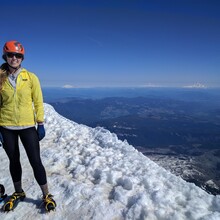 First off, thanks tor Sarah Morris for getting the women's board started. I can't wait to see more women start to enter the FKT world in the PNW and put up times on these mountaineering routes.

On Sunday, May 16th, I started the south side route up Mt. Hood right around 7am. After a warm weekend, the snow hadn't frozen overnight, and so was soft until around the top of the ski lift, above which it started to firm up nicely. Once I got to Hogsback, I noticed no one was going up or coming down from the Pearly Gates, but instead going up Old Chute. I decided to give Pearly Gates a go anyways, but after getting up about halfway on Hogsback, the bergschrund there had significantly grown since I'd last been up Hood, exactly a month ago on 4/17. I've actually never seen it that large. I considered going around it, but crossing over it on either side of the mouth was past my comfort level, as the snow bridges looked thin and I was alone. So I deviated plans slightly and ascended/descended via Old Chute to summit, which was in good shape. I reached the summit in 2:28:34. Echoing Alex King, I agree that there should be a separate page for Ascent Only times. So this might be considered a variation of the standard route, but it's so similar in distance and I'm posting it under the standard route page.

The descent was straightforward and fun. I was in my trail runners with micro spikes until Hogsback, where I then switched to crampons to the summit, and switched back to my micro spikes from Hogsback down to the car. Overall, I felt great and truly relish any time I get to spend in the mountains. Cheers!