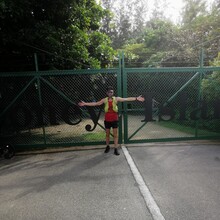 A very last minute decision, only decided the night before to give a go to this C2C route. I had run it once before with a group of friends at a leisurely pace.

I started a bit later than planned at 6:40am, I was a bit concerned where to find public water fountains without making big detours. I decided to still try to do unsupported and switch to self supported if I did not find water fountains if I needed it badly. In the end I only stopped once at MacRitchie Reservoir Park. I was a bit dehydrated at the end but OK.

I only had my watch on the map mode until 30k in when I checked how many ks were left to plan for a water stop at Sengkang Park but decided not to. It works much better for me when I run by feel and don't look at the pace on the watch, I start thinking too much when I do. I had a good rhythm until about half way, when I recharged water at MacRitchie Reservoir I lost my rhythm, was feeling heavy with some negative thoughts. When I turned onto Ang Mo Kio Ave 5 I found my rhythm again and the positive thoughts came back with it. I ran more purposefully to the end, it was a controlled easy effort until km32, with the heat and lack of water I had to push the effort a bit.