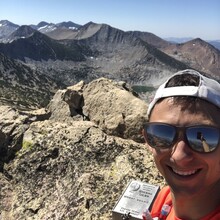 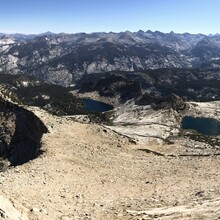 I started the day at 5:45 a.m. from the Happy Isles trailhead parking lot, up the Mist Trail past Vernal and Nevada falls (low water levels this year), passing several parties on their way to Half Dome. At the top of Nevada falls the trail flattens out considerably, and I mostly ran this section to Bunnell Point. I left the trail at what seemed to be the crest of the trail prior to it starting to descend, and headed due south ascending nice granite slabs. I had not read up on this route enough apparently, as I was very surprised by 500 - 1,000 ft. of steep bushwhacking through dense, tall bushes. After getting through that, easy walking through less steep forest led me to the basin north of Mt. Clark, with my first views of the striking peak. I chose to head due south, gaining the Northeast Ridge via some Class 2-3 slopes at the low point between Mount Clark and the next high point (~10,980) along its Northeast ridgeline. From there, ascending the Northeast slope was easy walking with spectacular views up until the Class 3-4 summit block. The summit register is awesome - bolted in to the rock and everything. I realized after departing the summit that I forgot to actually sign my name next to my log in the register - oh well...

Although this FKT submission is for the ascent of Mt. Clark, my day was just getting started, as I continued on to Gray Peak and Red Peak along the Clark Range. I had ambitions to hit Triple Divide Peak, Ottaway Peak, and Merced Peak in the same day, to complete a fairly complete traverse of the entire Clark Range, but as I was greeted with hail and lightning when reaching the top of Red Peak those ambitions were quickly thrown out in place of descending to the trail at Red Peak Pass as quickly as possible. Having more time than expected since I wasn't continuing on to more peaks, I laid down next to peaceful Ottoway Lake for 30 minutes, took my shoes off, and relaxed. Then, I started the ~20 mile slog back to Yosemite Valley along Illilouette Creek and eventually the John Muir Trail, which was fortunately mostly a soft downhill. With about 6 miles to go, my legs were certainly ready to be done, and whenever I would reach a trail junction I would treat myself to laying down for a couple minutes. I reached the car just about at nightfall, laid in my car for a while, and then eventually made my way over to camp. I didn't see a soul between Little Yosemite Valley Campground in the morning, and about 2 miles away from the John Muir Trail Junction on the way back.

I recorded on my Garmin Forerunner 225 from the start, and the watch battery lasted until Ottoway Lake (after Clark, Gray, and Red Peaks). This is the Garmin Connect link. I simultaneously recorded on my phone, which didn't pick up a GPS signal until a couple miles up the Mist Trail, but did last until the days end. This is the Strava link. Because this FKT is just for the Mt. Clark ascent, the .gpx file uploaded is a cropped version of the Garmin Forerunner 225 recording, which starts where the Mist Trail meets the driveable road, and ends at the summit of Mt. Clark. The ascent time of 4:40:54 includes total elapsed time from start to Mt. Clark summit.

I ran with my Salomon ADV Skin 12 pack, stuffed with 4 PB+J's, 4 Clif Bars, 3 Shot Bloks, and a power bar. I refilled my water twice at lakes along the way.