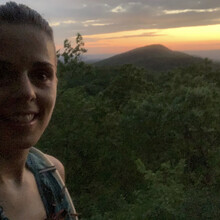 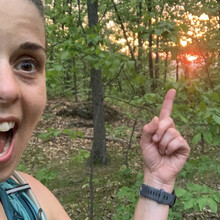 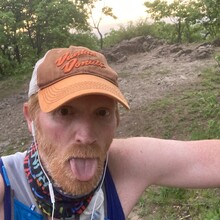 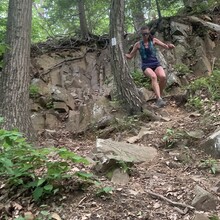 While not our best effort we figured we could set a standard for others, including us, to shoot for and I (Rufus) have a 70 mile race coming up in a few weeks so needed the work. Mile for mile this is potentially the most challenging run in New England, including the Pemi Loop. The hills are relentless but that's also what makes it such a challenge and so much fun. We set out just before 3pm. It was 90 degrees so we had packed a lot of water and left a second car at the turnaround for restocking. We went out very conservative from Harris Road and reached the notch in about 80 minutes and set out on the 7 sisters course which is the real meat of this run. Both Brenda and I have a good amount of experience on the course and run sub 2:30 (still a far cry from the top times) but we were definitely not going for any kind of PR on this day.  The heat became more of a factor for me but I took some pauses to get my heartrate down and stay level using the cold cold water waiting at the turnaround as motivation. We hit mountain road at 2:40 in and enjoyed a brief break to catch our breath and refill our pretty much empty water and tailwind supplies before heading back on the trail around 2:47. The road back become more of a challenge for me but Brenda was feeling pretty good so about 13 miles in she ran up ahead of me and passed the notch and went over Nowortuck before we regrouped as the sun was fading. Much of my momentum had been lost and I power hiked to the top of Hitchcock and Bare Mtn for the most part before jogging down to the notch at about 4:32 which put my sisters time at 3:22 - a little over an hour of my best time but for the day and what I was trying to accomplish I was not complaining. The temptation to cut the effort and take the flatter Robert Frost option was there but I'd quit on the course last year and didn't want to let it get the better of me again so I pushed up Nowortuck and with about 3 miles to go regrouped. We had anticipated the run taking about 5 hours so thought we'd be back before sunset but as we connected again to finish Long Mountain we were pretty much in darkness so that last 2 miles were definitely slowed since we didn't have headlamps and had to use our phones for guidance. Finding the car again was elation as we both really gave everything we had on the day.