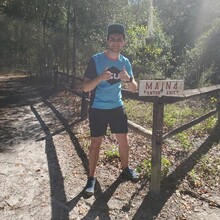 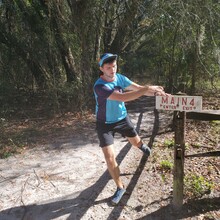 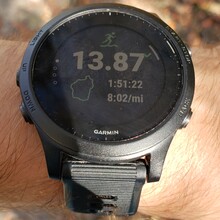 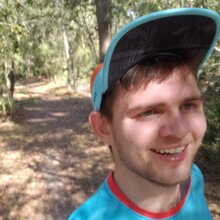 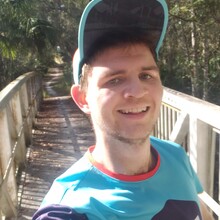 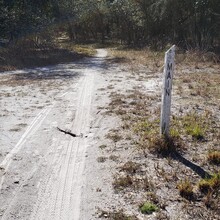 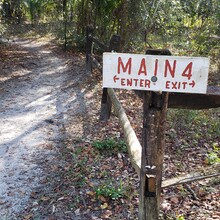 I ran an unsupported clockwise loop of the Morris Bridge Loop. It was a lovely single-track trail. It started by entering the Trout Creek Park and following a paved then gravel road before going into some of the windiest single track I've been on. My ankles definitely got a workout as I snaked through the trail all while keeping track of the route using the map on my watch. This was my first time running the trail so I was checking frequently to make sure I was still on track. I made sure to eat every 30 minutes or so (using gels I brought with me) to make sure I kept up my energy. Unfortunately, I didn't bring any water, but it was cool enough and there was enough shade where it didn't really become an issue until maybe the last couple miles. There were a few more road sections and some sandy sections, and I tried to make sure that I was pushing myself as much as I could on each surface. The most challenging portion of the trail was in the last two miles where the trail crossed through a mountain bike park and I had to slow down quite a bit to make sure I was staying on the route since there were offshoots everywhere. At one point I accidentally went down the wrong trail (I had been following the Main Trail the whole time and assumed that continued, but in reality, the route when to one of the offshoots called "Grandpa") but luckily my watch told me I was off course after about 10 seconds and I was able to quickly fix that mistake. It wasn't until the last mile that I really started to feel gassed, but then I took the last of my gels and just booked it until I smacked the sign where I started the route, exhausted but proud of my accomplishment. Overall, I think it was a great challenge for me and I'd love to try it again someday now that I know the route and can just focus on performing the whole time. Perhaps the best part was the founder of the route reached out to me on Strava after I completed the run and congratulated me and told me he was glad to see someone tackle his record. That experience and all the support I received after the run reminded me why I love the trail community so much. Besides passing a couple of people on the trail going the opposite direction, I did not spend time with anyone (my father was at the end of the loop taking the pictures of me finishing, but that was the only time I saw him besides when he dropped me off).

P.S. My watch time was 1:51:22, but Strava said I completed the segment in 1:51:21. It's only second, but I'm not sure which one is best, so I put the watch time. Also, if you have any questions or concerns about performance, don't hesitate to contact me. Thank you for all that you do!