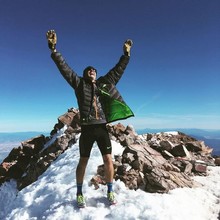 Ryan Sorenson and Ryan Ghelfi went after the ascent record for Shasta on May 29, 2015. Ghelfi turned back and Sorenson appears to come close to the FKT, around 1h39m, but had trouble with his timer (as mentioned below).

Sorenson reported about the timing problems:

Thank you everyone for the encouragement and congratulations over the last few days. I am honored to have your support. However, unfortunately I did not break the Mount Shasta Ascent Record. My watch stopped recording a few times during the last attempt. I think my time to be somewhere around 1:39, 1:39:54 was what the gps said when I plugged it into the computer. GPS can be seen on www.strava.com/activities/316174186 and www.movescount.com/moves/move64096830.  I will be making a second attempt with more reliable timing in the next few weeks, weather dependent.

Ryan Ghelfi reported taking 65 seconds off Rickey Gates' 2012 ascent record, for the current FKT of 1h37m05s, set on July 6, 2016. A nice article about Ghelfi's record is by the Mt Shasta Herald.

Today (July 6 2016) I was able to set a new FKT on Mount Shasta from Horse Camp to the Summit. I completed the climb in 1:37:05 Strava data here (https://www.strava.com/activities/632531220) For gear I used middle distance track spikes with long spikes and trekking poles, no ice ax.

I have made 5 different attempts on this record over the last 5 summers. This one had all the right ingredients. Great weather, firm snow conditions (though no snow at Horse Camp so we had to change from running shoes into track spikes after the first 8 minutes or so. Ricky had to do the same thing when he set the record. Not much wind and mild temps made the whole climb pretty manageable. There were only about a dozen or so other climbers on the route so that helped as well to not have to pass many people at all.

I had to go pretty much all out to get this one. The record was in doubt for me util the last couple hundred feet when I could tell I had the time. This is definitely a beatable record and one that I hope others will continue to pursue.