Mt. Shasta (14,162') is this northern-most 14er in California. The standard route climbs from Bunny Flats at 6,880' to the Sierra Club cabin at Horse Camp (7,900'), and from there up Avalanche Gulch to the summit. The current and previous FKTs were timed from Horse Camp.

We also have a variation for ascending Mt Shasta from the town of Shasta, which is more truly the "base" of the mountain (where it starts to go UP).  This is logically done as a duathlon, riding a bike 11 miles from town to the TH, and then hiking up.  Jason Hardrath proposes the starting point as follows:  "...the intersection of the A10 Everitt Memorial Hwy with Rockfellow Dr. that has a sign designating the start of the A10 up to Mt. Shasta."

Robert Webb's 1985 record was reported in the L.A. Times on November 10, 1985. At the time, Webb was working as caretaker of the Sierra Club cabin at Horse Camp. The article indicates that, prior to Webb, the ascent record was 2h25m, set in 1925 by David Lawyer of Pasadena.

In 1998, Webb climbed from Horse Camp to the summit, and skied back down, 6 times in 23h22m, for a total vertical ascent of 37,572 feet. Apparently, he had 6 pairs of skis stashed at the summit. This may have been a record for the most vertical feet ever climbed on a mountain in 24 hours (since broken). A report is here.

"If you don't take risks, you don't get the adventures." -- Robert Webb

Here's a list of past fast times on Shasta reported at www.siskiyous.edu/shasta/out/cli/rec1.htm, which was kindly brought to our attention by Sean O'Rourke. Not all of these are considered FKTs, as there has been an ethic of "verification" for Shasta ascents and "certification" by the Sierra Club, as described in the article (which is really worth reading, as it outlines an incredible history of speed ascents going back well over a century!) All of these times are for Horse Camp to the summit.

All of these records are by men, and we haven't been able to track down much information on FKTs by women.  According to the California Outdoors Hall of Fame, Laurie Bagley has or had the Shasta FKT at "133 minutes" (2h13m), set in or about 2005.  We hope to learn more about women's FKTs.

The "Sisson Historic Climbers Route" [submitted by Jason Hardrath] was the way climbers and their pack animals ascended from town to the Historic Horse Camp from 1860 through 1950, when the route fell into disuse after the A10 Everitt Memorial Hwy was completed. John Muir himself ascended the mountain this way en route to living out the tales that would captivate American minds for generations into present day. You are in for a big treat with 10.5k' of continuous ascent over 11.1 miles, before reversing it back to the start. Enjoy!

This Route starts from just within city limits at the end of the A10 where it intersects Rockfellow Dr. There is a bright yellow (as of 2020) crosswalk to use as a start finish line here at ~3650'

From the start run exactly 1 mi up the highway where you will see the mile 1 signpost (brown) followed by the Gateway Trailhead, this is your turn.

Hop on the Lollipop Trail as this will connect you into a left on Mcbride trail, all of which are a part of the Sisson Historic Climbers Route from town (the GPX file and a short rehearsal of this lower trail network really helps)

You'll cross the A10 and proceed past the McBride Campground where you will see a functional manual water pump, refill here or hold out until the spring at Horse Camp (you will want to double check both of those are flowing before relying on them)

You will see a sign indicating 4.5 miles to horse camp and will start seeing "Sisson Historic Climbers Route" signage.

The trail merges with old roads off and on but staying on route is fairly easy for those experienced.

Once you arrive at Horse Camp, you climb the storied Avalanche Gulch Route, which hosted races up the mountain (see history for "Mt. Shasta ascent from horse camp")

Tag the top of the summit, split your watch to record an ascent time to include in your write up, snap a photo, sign the register if you please, then bomb back down everything you just ascended...as you cross that yellow line celebrate as you just round tripped one of the >10k' continuous climbs on the West Coast.

Which brings me to another motivation for this route, it is one of the mega-climbs (10k'+ continuous) of the West Coast. Others include the infamous "Cactus to Clouds to Cactus" on San Jacinto and the rarely attempted "Shorty's Well to Telescope Peak" in Death Valley, even the round trip FKT from Lone Pine to the Summit of Whitney is one of these... all of them posing the unique challenge of 10-11k of continuous ascending (then descending). "Sisson Historic Climbers Route" from town to town is now one such endeavor.

Where he completed 6 laps from Horse Camp in just under 24hrs. This record may be beaten in two ways:1. Do one more lap 2. Do the same number of laps in a faster time. 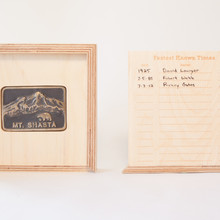 I know this is not part of this thread yet, but I thought that it would be a good addition on Mt Shasta for fast movement on logical paths and means of travel.

On June 12th, 2019, I climbed (with skis) up Avalanche Gulch. During my climb the snow conditions were looking exceptionally good and I had my heavy skis, so I decided it was the right time to make a fastest known Descent. I started my time from about 10ft off the true summit with my skis on my feet. I descended Avalanche Gulch via the left of heart variation all the way back to the Bunny Flat Trailhead. My time was 18:05. You can see the laps (unfortunately my watch was on auto split for the backcountry ski function, so I just had to add the laps comprising the downhill portion) in the Strava file here. https://www.strava.com/activities/2445356688/overview

I actually think that this could be an FKT that catches on with a bit different crowd. It takes a lot of endurance just to summit the mountain, and it takes a surprising amount of endurance to ski it top to bottom hard without stopping. The skiing is not technically difficult other than a few turns off the summit and the very top of the left of heart face. I predict that a strong skier can hammer this thing out in about 12-13 minutes if they are motivated and the conditions are good. Which is kind of crazy to think about when looking at the mountain and considering it's 7,400ft of drop.

Tried to get the roundtrip ski record on Shasta today, hit the summit in 2:05 from Bunny Flats but snapped both of my skis descending bad rime on Misery Hill.