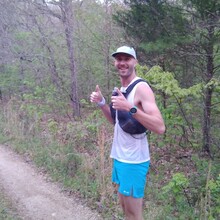 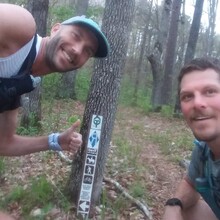 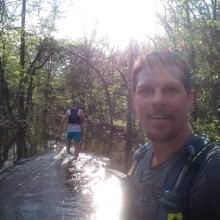 The attempt started 6:20am on May 2nd. We car camped Friday night and got underway Saturday morning. We knew that it was going to get warm on the day but our concerns were certainly withheld. The temps and humidity early were taking it's toll too. There were plenty of water sources early in the attempt through the first 16 miles but from 16-28-ish they were few and far between and as much as we were able to stay hydrated the heat of the day absolutely crushed us from those last 12 miles. It became very clear to us with about 5 miles left that a full out and back attempt on the hottest day of the year so far was a potentially harmful idea. We decided to call it quits and just do the section one way. We could not be more fortunate to have had Jake at the turnaround because going back in the heat of the day would have not been the safest or smartest idea.

This section is certainly capable of a much faster FKT time, even unsupported if attempted in cooler temperatures. I would also say that any attempts past early May will have some sections of overgrowth that would make it very difficult to run as well.

Hoping more people go get on this section of trail because it is classic Ozark Trail rocky and rugged with some beautiful views!