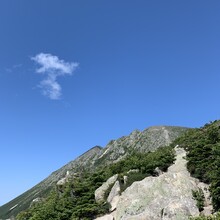 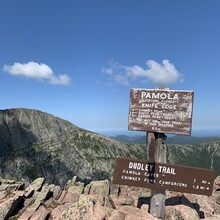 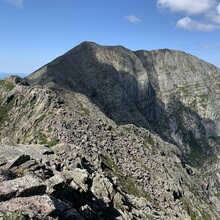 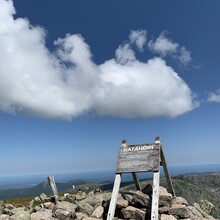 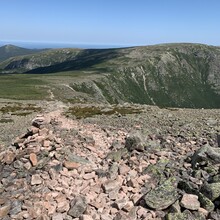 Lucked out with a beautiful sunny day in the 60's/70's during the run.  Made good time up Keep Ridge to Pamola (8 minutes under previous FKT split) and headed down the chimney just behind another party of 4 or 5 people.  I lost somewhere between 2-4 minutes waiting in the notch but part of the way up they kindly let me pass - nice folks who knew that I was in a hurry.

I took it easy on the Knife Edge and just kept a consistent hiking pace.  I never like to push it too hard on that ridge.  There was hardly any wind on the mountain that morning making it pleasant to be up high.

Once tagging the summit I started heading down the AT rather than over to the Saddle; costing another two minutes.

The descent off of Baxter Peak across the moon landing surface of the trail was steeper than I remembered and I didn't catch up on time like I had hoped to.  It took me a while to get over to Hamlin and then towards the summit I had decent hamstring and quad cramps..not ideal or expected.  I made it to the peak at approximately the same split as the previous FKT (2:22).

It was a bit of a hobble down Hamlin Ridge and to the intersection with the Chimney Pond Trail.  After running on the still very technical trail for about a mile I stopped feeling sorry for myself, ate the last food I had easily accessible, downed the last water, and went for it.  For a moment I had my filter bottle cap off thinking about stopping to refill but in retrospect I'm glad I didn't.  I figured I'd rather miss the time trying hard rather than folding so close to the finish.  At that point I didn't think it was likely I'd make up the time.  Once along Roaring Brook I thought I could maybe pull it off and hammered to the ranger station eating shit somewhere around the intersection with Helon Taylor.

All in all a great day and felt good to best my 2019 time by about 25 minutes.  I love this mountain.