Being the most direct access to Baxter Peak, the Abol Trail has the reputation to be steep and relentless. The Abol Trail was closed from spring 2014 to summer 2016 due to a rock slide that occurred in 2013. A new trail segment has been opened, which, before reaching the rock slide, will diverge to the northwest, making a traversing ascent before switchbacking along the rib that is west of the slide. The route is now slightly longer (3.6 instead of 3.2 miles), less steep (average 30% instead of 47% on the slide part), and slightly easier (less scrambling and firmer ground). However, the most challenging part, the upper slide, remains unchanged. The GPS track on this page includes both the new and the old trail.

As a result of the re-route, new FKTs will have to be set for the new trail.  There is a Strava segment for the ascent.

Another route is the Helon Taylor Trail from the Roaring Brook CG over Pamola Peak.  It is about 4.1 miles each way.

Still another way is the Hunt Trail from the Katahdin Stream parking lot, about 4.6 miles each way.

The Thoreau Traverse ascends the Hunt Trail from Katahdin Stream to the top & then down to Roaring Brook via the Helon Taylor Trail (or the other direction).  It is logical to do this out & back, unless one has arranged a shuttle of some sort.

The Katahdin Cirque variation follows the rim of the South and Great Basins. It is as pure an alpine running route as it gets in New England with treeline dropping out at around 3,500 feet and a long stretch of exposed, highly technical terrain. The route starts at the Roaring Brook Campground heading up the Chimney Pond Trail for a brief moment and then quickly diverges onto the Helon Taylor Trail. This is followed to Pamola Peak and then in and out of "the chimney" and off onto the Knife Edge, a thin, one mile pile of rocks leading to Katahdin's South Peak and eventually the summit proper. From there you run along the edge of the Table Lands, past the Cathedral and Saddle Trails and north along the Northwest Basin Trail. Upon reaching the Hamlin Ridge Trail you head east to the Hamlin Peak summit and descend back into the cirque. At the bottom of the ridge take a right to the North Basin Trail eventually intersecting back with the Chimney Pond Trail, which will take you back to Roaring Brook. This loop is the most obvious on the east side of the mountain and provides high adventure in a remote part of New England.  The Katahdin Cirque Route clocks in at about 10.7 miles with an elevation gain of 4,800 feet.  Parking is very limited at the Roaring Brook Campground and you must make sure you have a day use pass or have reserved a campsite. Additionally you must sign in and out of the trail register at the Roaring Brook ranger station. The only (mostly) reliable water source on the mountain is at Caribou Springs, just before heading up to Hamlin Peak.

This is one of several possible configurations to accomplish travel on all the trails on Katahdin (for the FKT you can do these any way you want). This FKT route includes all trails that lead from a vehicle accessible trailhead to and/or from the summit of Katahdin, and all the trails (including spur trails) on Katahdin itself. So, it does NOT include Hamlin Ridge Trail, because one can take Saddle Trail from Chimney Pond/Roaring Brook to get to Katahdin. This FKT does NOT include access to Katahdin from the north (North Peaks or Northwest Basin trails to Katahdin via Hamlin Peak or Hamlin Cutoff) because those routes are not accessible from vehicle accessible trailheads. Basically- you do not have to traverse Hamlin Peak to get to Katahdin, so these trails are not included here. This FKT does include trails from Roaring Brook trailhead and trails that include traversing Pamola Peak and the Knife Edge, because these trails need to be used in order to access summit of Katahdin from the east in the most direct fashion.

This "All Trails" route starts at Abol Campground trailhead and directly ascends to the Tableland area below Katahdin summit (Baxter Peak). This section passes through wooded lowlands and old rockslides, then goes up through wooded and bouldered switchbacks, before going straight up the old Saddle Slide. The trail crosses the alpine Tableland and connects with Hunt Trail for the final gente uphill to the summit (Baxter Peak) of Katahdin. From here go east across the Knife Edge Trail toward Pamola Peak. This rugged section is all open rock along the arête that connects Katahdin and Pamola, and is known for trail sections only a few feet wide with steep dropoffs on both sides. After traversing the trickly Chimney notch, one reaches Pamola Peak. Take the Helon Taylor Trail to descend along the beautiful and exposed Keep Ridge, then into treeline scrub and eventually hardwoods to get to Roaring Brook Campground. Next take Chimney Pond Trail to Chimney Pond Campground (no car access). This trail winds gently upwards via rocky trails and over several beautiful wooden foot bridges, past Basin Ponds and ends at the ranger cabin. Next, take Dudley Trail through a large boulder field near Chimney Pond, then upwards through wooded switchbacks and stairsteps. Eventually, one comes out at the treeline below the boulder strewn knob beneath Pamola Peak. Continue boulder scrambling until reaching Pamola Peak (again). From here take the narrow and challenging Knife Edge (west this time) back to Katahdin summit (the second time). Now take Saddle Trail to descend back to Chimney Pond. The path from the summit to the top of Saddle Slide is straightforward and slopes down through talus, scree and boulder steps. The top of the slide is very steep, open rock, some of it loose. Saddle Trail eventually turns into a steep hardwood bouldered trail, often wet. Finally reaching Chimney Pond again, take Cathedral Trail back up Katahdin. Cathedral passes along a dramatic ridge and skirts gigantic rocky prominences, sometimes requiring nearly rock climbing moves. A steep final ascent gets one to the last bit of the Saddle Trail and then the Kathdin summit (for the third time). Now descend via Saddle Trail to the intersection with Cathedral Trail and this time descend Cathedral. After a short time turn left onto Cathedral Cutoff Trail to traverse a broad shoulder of loose rock and connect with Saddle Trail halfway between Katahdin Summit and the top of Saddle Slide. This four-way intersection is also where Baxter Peak Cutoff Trail connects to Saddle Trail. Take Baxter Cutoff, a relatively level trail, from here and follow it through rocky alpine sections, stunted softwood and hardwood patches and finally a boulder field before it terminates at the four-way intersection with Hunt and Abol Trails. From here follow the white blazes (AT) of the Hunt Trail west as it crosses the Tableland and then plunges down along the exposed Hunt Spur ridge. Plenty of boulder scrambling here, complete with some old iron handholds stuck into the rocks. Eventually the exposed trail drops into a woodland and passes the beautiful Katahdin Stream Falls and levels out just before ending at Katahdin Stream Campground.

NOTE- This route includes the lesser used Baxter Peak Cutoff and Cathedral Cutoff trails because they are located on Katahdin itself and this FKT is an “all trails” route. Their main purpose is to provide a non-sumit alternative for hikers traversing the mountain, such as may be used in bad weather. 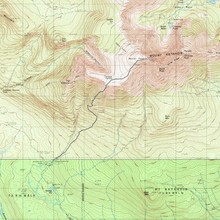 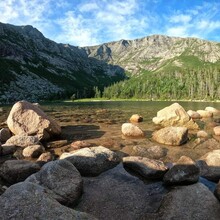 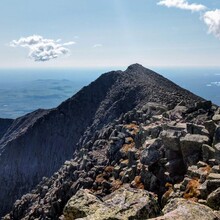 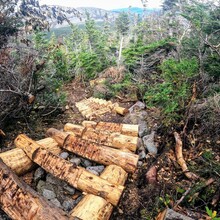 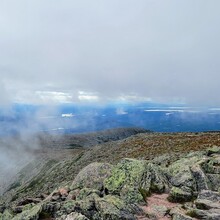 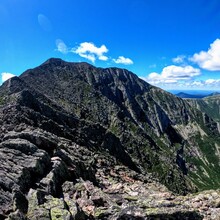 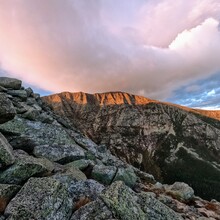 This route on the old FKT site
http://fastestknowntime.proboards.com/thread/118/katahdin-me