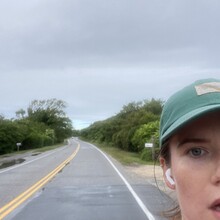 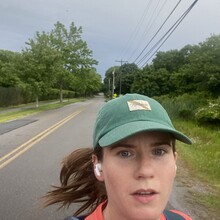 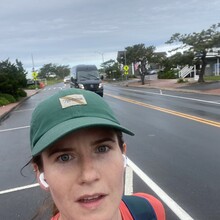 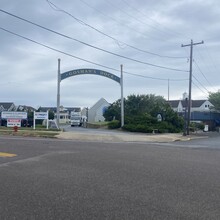 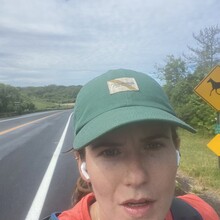 I started at the Sag Harbor wharf at 5:53AM, dropped off by my mom (thanks Mom!). It was around 56 degrees F and raining lightly, which felt perfect. I had with me a Camelback full of 1.5 liters of water and 8 gels -- I planned to take them every 4 miles and alternate between caffeine and non caffeine. I wore a T-shirt, spandex shorts, a baseball cap, and Nike Vaporfly shoes (figured the road surface would be perfect for them). The first 10 miles felt easy and smooth enough that I sped up to around 7:30 pace, deciding to try for sub 4 hours. The first half starting from Sag Harbor is super flat! I was cruising and felt great.

At the halfway point, I checked my pace -- I was on target for less than 4 hours if I could keep the splits even, with a bit of wiggle room. Still felt very good. Things got a bit tougher around mile 18 and 19, where I ran into a lot of rolling hills on Old Montauk Highway. Managed to keep the splits still on target, but was a bit drained after running through Montauk, around mile 21. Ran into a killer of a hill on miles 22-24 on the way to the wharf! Luckily it was followed by some nice downhill leading into the wharf loop. Some flats carried me through the marathon and mile 27 -- toughest part of the day for me as I felt the pace starting to slip a bit. Simultaneously, it stopped raining and the sun started peeking out. Luckily it wasn't too warm yet.

Mile 29 and 30 were just the biggest hill I'd seen all day. Wow. I slowed down to 11 min / mi pace for a second there just to get up it, and resigned myself to slipping below my target time. Checking my Strava though, I realized I could still break the time record if I really hung on and pushed myself on the last mile. At 30.75 it started to go downhill again, and I took off! Final straightaway was tough and when I saw the crosswalk and crossed it I was happy and exhausted. The sun was out and it was just getting warm, around 9:57 AM... I definitely lucked out with the weather.

Not sure I would recommend the Sag Harbor -> Montauk direction to anyone else! Finishing with all that uphill was super tough. But glad to have done the route and very much enjoyed it! I didn't end up drinking all my water so not sure I would take as much for my next 50K -- I did however time the gels perfectly and ate all of them.