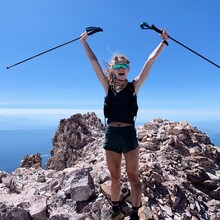 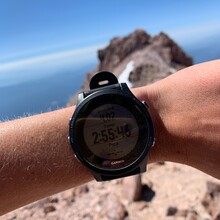 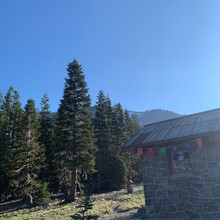 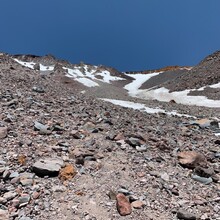 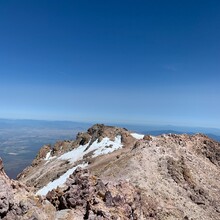 Here's how it went:

Woke up at the campsite somewhere in the woods by Castle Lake. Lot's of coffee, oatmeal, grabbed my stuff packed the night before, drove to Bunny Flat trailhead with a fantastic view of what I was about to run right in front of me the whole drive.

Leisurely hiked from Bunny Flat to Horse camp. Resisted the urge to run to save it for the climb.

Started my watch from Horse Camp, as the route goes. Tried to take it easy starting out since this was my first time on the route and I had no idea what was in store. Loved the switchback section of the first climb up to the the base of the Avalanche Gulch part- 10/10 already. That first part took about an hour. Based on the previous women's FKT split, I figured I was on pace at this point. Once I got to the gulch part it got super steep and rocky. Aimed to find the best line in the scree and steadily power up that. It was difficult to follow an exact trail in the scree, but really tried to follow where the rocks looked more traveled. Bared right, as the left looked snowier, which led to the final part of the gulch climb - the steepest of that section. Climbed up on some rock for the last part which was a little sketch in hindsight...but you don't really think too much about that in the moment.

Came to where the trail leveled out a little and followed it to Misery Ridge which was completely scree. Amazing view at the top of that section, and could see the summit in sight. Mostly snow-covered up there, which was easier to run fast on than the scree. Although, "fast" is all relative at 14k. Saw that I was at about 2:40min around then, so I though if I pushed I could break 3hrs. A pair of hikers were up ahead, so I pretended we were in a race and that I had to catch up to them to make up some time. Go to the Summit at 2:55 min! Very happy with this effort. Any day in the mountains is a great day, but especially when you do something you've never done before and have been wanting to do for a while!

Hoka Speedgoats- THE ABSOLUTE BEST - these held up like champs, even though they were worn to begin with.

Black Diamond Distance 8 pack - maiden voyage for this baby and I can't wait for many more! Perfect size and fit.

Black Diamond Carbon Z poles - hadn't broken those out since Chamonix this time last year. Forgot how much I missed and loved them! Wouldn't have wanted to go without them on this route.

I couldn't find my microspikes at home when I was packing so I thought "ehh, I'll have to do without". Wouldn't recommend that- especially for the snow part coming down, yikes- but anyways, it all worked out.

Some lime Nuun tablets in my water

Was inspired by this route since I learned about it from Ricky Gates a few years ago. Highly recommend this route to anyone who is even thinking about doing it!  ESPECIALLY to any female runners! Let's get some more fast ladies times on this route!