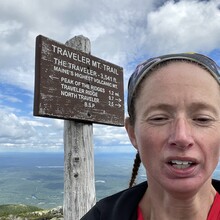 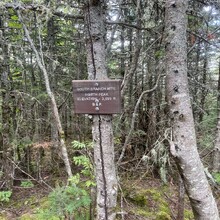 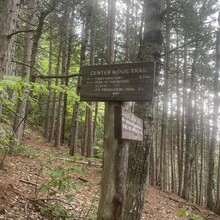 I started at the sign behind the Ranger station at South branch Pond. Across the stream and headed up South branch mountain and beyond to Blackcat mountain. From here it was a steep dissent to meet the intersection of the Pogey Notch Trail. Over portions of South branch Mountain and black cat Mountain the trail was heavily overgrown and very poorly marked. This added a significant amount of time to my effort because I was constantly backtracking to make sure I was still on the trail. From the intersection of the pogy Notch Trail I picked up the trail that goes back towards the campground for almost a mile and then turned onto the center ridges trail. Markings were very faded on the center ridges Trail so I ran into the same problem again, constantly losing track of where the trail was. I hit the peak of center of the ridges and then onto the actual summit of traveler. From here the trail was much better marked and easier to follow. The wind was the worst I’ve ever encountered. At one point it actually lifted me up off my feet!.  It was one heck of a day and took a lot longer than I expected but I descended from the traveler summit and then back up to the summit of north traveler, and then finally descended back down to the pond and finished at the sign behind the ranger station.
No one was with me for any portion of this. In fact I saw very few hikers along the trail. I did not obtain any supplies even water. I brought everything I needed myself.