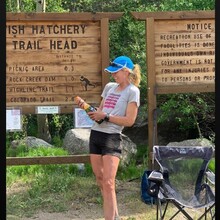 This line through the Sawatch has been haunting me for years. As a bit of an underdog coming from the East coast, with little experience at altitude or in real mountains, it's been a huge challenge to piece this thing together to the point that it all works. I've made three previous attempts, all of which ended in failure, though not due to lack of ability, I think rather due to bad luck. I won't claim that this year's run was perfect. It was far from perfect. I struggled with sleep deprivation and made a lot of last-minute, unplanned and unscouted route changes, most of which we're not to my benefit and some of which were super sketchy. And yet they somehow all worked out ok in the end.  This time I chose to go alone, unsupported, and I ended up loving it. I eventually found my way to the Fish Hatchery; I made it through two nights and over 14 summits with only what I carried on my back. That's pretty darn cool feeling, being that self-sufficient; I'm glad I stuck it out long enough to finally earn it.

Food: Lots of Skratch, instant coffee, oatmeal creme pies, BBQ Pringles, chocolate covered pretzels. Brought just under 8,000 calories but only consumed about 4,500 (I am not a good eater)

Links to more in-depth interviews with play by play descriptions of each mountain:

Break on Through with Sarah Hansel https://open.spotify.com/episode/5RU8wUxxU1pQgTxo5u0waS