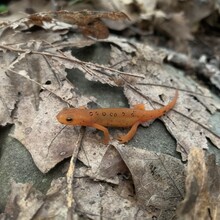 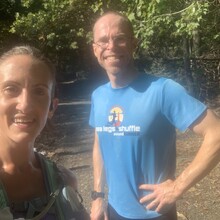 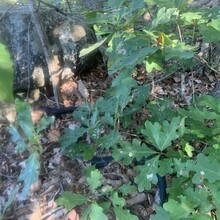 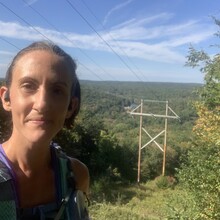 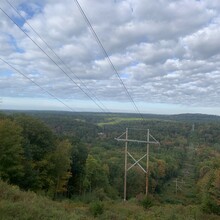 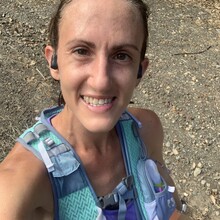 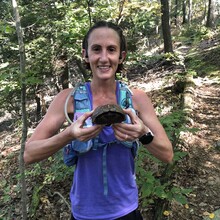 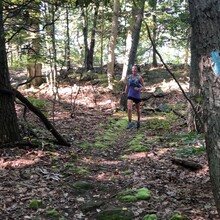 When Mary Louise first did this route, I told her I didn't ever want to do it. But somewhere along the line I became interested in holding all the Regicides Trail FKTs at the same time (once, twice, and four times along the extremely technical 6.5mi route), because it's my home trail (of the CT blue blazed trails) and it's really my kind of running. The more technical, the better, for my competitive odds anyway.  So I did it, I have them all, but I don't need to HOLD them all hahaha so I probably won't do the quad-Regi again. I do expect to make some attempts to better my other times here. I love this route. It's treacherous, you can't take your eyes off the trail for even a second (which is probably how I spotted two newts, two black rat snakes, and a box turtle!), and even with your full attention it's nearly inevitable that you'll fall or twist an ankle or stub your toe at least a few times. I had some moderate ankle twists and toe-stubs but no falls, thankfully.  And honestly, it just wasn't as bad as I thought it would be! I know it could have been, but things went pretty well for me and I'm really relieved that it's over and feel pleased with how it went.

I intended to do this self-supported, with a box full of water bottles and snacks stashed where I began, but realized during the first of my four out-and-back legs that I left the tailwind bottles in the fridge that morning. I wasn't going to be okay without them, so I asked my husband to bring them to me. I'm thankful he was able to! He found my box and left them there for me without ever seeing me, but my forgetfulness made this a supported effort from there on out, so I figured I may as well ask my running friends who were tracking my progress anyway if they wanted to come out and join me, and they both did!! Alex McDaniel lives near the south end, so he did a few miles with me there, and Annalisa Paltauf is near the north end and did a good long stretch of it there with me. She also gave me more water, which I told Alex I didn't need but it turns out I did.

I have so much to be thankful for. :)

I lost some time with refueling and filling my water bladder, etc, but didn't sit down or linger at my little aid station. The most time I lost was early on in the second half of my effort, when I came across two older women hiking. I had seen them earlier headed the other way, but this time they asked for my help in navigating, so I stopped and pulled out my phone to look at a map with them, and then continued on in a couple minutes. But then I realized I had gotten turned around (after two out-and-backs and 3 hours of running, I think that's understandable) and given them the right instructions but in the WRONG direction down the trail!! I felt awful and turned around to try to catch them and tell them... then realized I was being crazy and I needed to keep going (thank you for the reality check Annalisa and Michael!) so I turned around again and continued on my way. They weren't there when I reached that spot again, so they must have found their way. Other than that, my pacing was pretty consistent! I slowed down a little, but not much at all. Soon there will be a fluffy layer of leaves on top of the already hazardous, angular rocks that make up the bulk of this trail, so I'm glad I got it done! Looking forward to taking another speedy crack at this trail now that I know it even better! Maybe someday I'll be able to break an hour on the single traverse... maybe. For now, I'm really happy! And really grateful for my trail community. <3