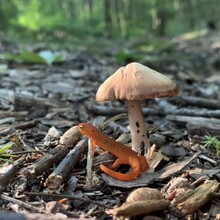 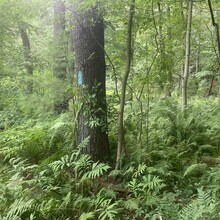 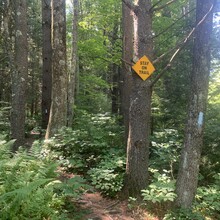 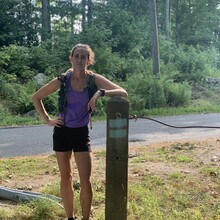 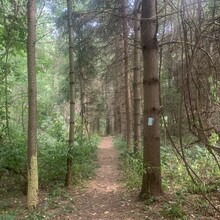 This is not a fast time, so I don't expect it to last long. But it was long and hot and miserable and the trail was pretty overgrown in spots, and blocked by recent blowdowns from a tropical storm that happened 5 days earlier... so I'm counting it even though the pace looks casual. I think I could take 90mins off without much trouble on a cooler day, but I'm not sure when/if I'll want to do that. I ran out of water even with a water drop and became severely dehydrated. In a wetter season this would be a very wet trail, but all the water crossings were dried up except the Farmington River and a couple ponds/reservoirs. Side note: they are very particular about you staying on the trail here. There are signs EVERYWHERE and the Farmington River is the only body of water that you are currently allowed to swim in. I wish I had taken a dunk.
There are a number of places in the southern half that are really difficult to follow. One is between 202 and S East Rd, where it is super overgrown with both wood nettles (OUCH!) and the blazes seem random. The other is near Sawmill Rd where new house construction disrupted the trail but some of the blazes from the old route are still in place. I'm still not sure what's going on there, it's a hot mess.

Northern end of the trail had TONS of salamanders, which I absolutely loved. I have never seen so many in one place before, I actually had to watch my step.